A mysterious white-colored plume extending some 950 miles (just over 1,500 kilometers) has been spotted on the leeward side of the Arsia Mons volcano on Mars. 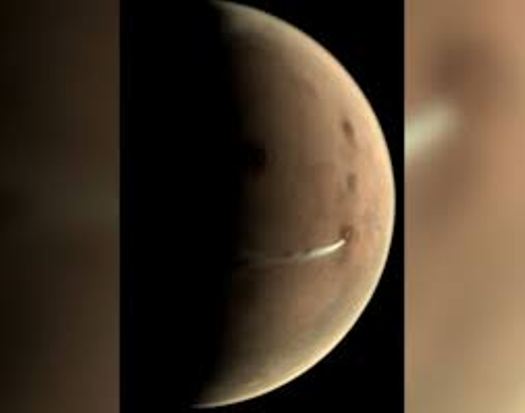 Unlike other Martian cloud structures that seem to poof in and out of existence, this one has staying power, with the lengthy plume hovering near Arsia Mons since Sept. 13 and seen as recently as Nov. 12, according to the European Space Agency. The agency’s Mars Express camera has been recording images of the mountainous cloud.

“Montane clouds are very common on Mars, but it was the length of the cloud and its duration that makes it interesting,” said Francois Forget, a senior research scientist at the National Center for Scientific Research (CNRS) in Paris. “Usually, it is more localized to the volcano.”

Forget and his colleagues could rule out volcanic spewing as the cause of the cloud: The Arsia Mons volcano has been inactive for at least 10 million years, and its peak activity occurred even longer ago — about 150 million years ago. At approximately 12 miles (20 km) high, Arsia Mons is the southernmost volcano of a group of three ancient volcanoes located on an elevated plateau known as the Tharsis regionon Mars.

The development of the plume, called an orographic or lee cloud, is due to a combination of factors that are common in mountain regions on Mars and even on Earth.

Dust and cooler air are the main ingredients. The images of the plume were taken after a global dust storm had finally subsided on Mars. While dust storms occur, sometimes they develop into global storms, as happened this year.

“The dust storms create darkened conditions and reduced heat at the planet surface and increased absorption of solar radiation and heating by the dust particles high in the atmosphere,” Forget said. “Just like tropical air on Earth, when this unusually warm air encounters a topographic feature such as a mountain or ancient volcano such as Arsia Mons, disturbance in the air parcel is created as it is forced upward and over the volcano to even higher elevation.”

At higher elevations, the air temperatures are cooler and the atmosphere is thinner, he added.

When the air cools to its dew point, the water condenses and water-ice clouds form.

“Given the conditions, the ice particles do not sublimate [transition directly from ice to water vapor]. As a result, the cloud transports water ice a long way, constantly being renewed by the wind,” Forget said. He added that”the plume on Mars is similar to the varying duration of contrails from airplanes.”

These hot exhaust trails from airplanes are also rich in water vapor. If the air is cold and humid, the exhaust condenses and may freeze, similar to what happens with the warm, humid Martian air when it hits these higher topographic features.

As for why the Martian plume is so long-lasting, Forget suggested it has to do with high humidity. The more humid the air, the more likely that the lee cloud can renew itself on the waves of air for such a long distance on the leeward side of the volcano. “We can speculate that before encountering the volcano, the air was ‘supersaturated’ with water vapor so that once condensed the water-ice cannot sublimate,” he added.