A previously unobserved mechanism is at work in the Sun’s rotating plasma: a magnetic instability, which scientists had thought was physically impossible under these conditions. The effect might even play a crucial role in the formation of the Sun’s magnetic field, say researchers from Helmholtz-Zentrum Dresden-Rossendorf (HZDR), the University of Leeds and the Leibniz Institute for Astrophysics Potsdam (AIP) in the journal Physical Review Fluids. 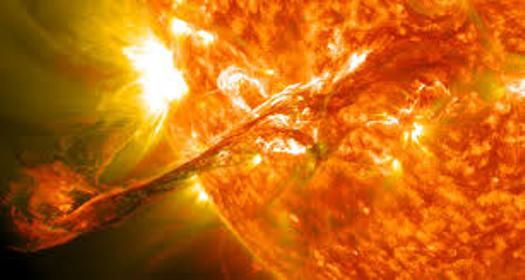 Just like an enormous dynamo, the sun’s magnetic field is generated by electric currents. In order to better understand this self-reinforcing mechanism, researchers must elucidate the processes and flows in the solar plasma. Differing rotation speeds in different regions and complex flows in the sun’s interior combine to generate the magnetic field. In the process, unusual magnetic effects can occur — like this newly discovered magnetic instability.

Researchers have coined the term “Super HMRI” for this recently observed special case of magnetorotational instability (MRI). It is a magnetic mechanism that causes the rotating, electroconductive fluids and gases in a magnetic field to become unstable. What is special about this case is that the Super HMRI requires exactly the same conditions that prevail in the plasma close to the solar equator — the place where astrophysicists observe the most sunspots and, thus, the Sun’s greatest magnetic activity. So far, however, this instability in the Sun had gone completely unnoticed and is not yet integrated in models of the solar dynamo.

It is, nonetheless, known that magnetic instabilities are crucially involved in many processes in the universe. Stars and planets, for example, are generated by large rotating disks of dust and gas. In the absence of a magnetic field, this process would be inexplicable. Magnetic instabilities cause turbulence in the flows within the disks and thus enable the mass to agglomerate into a central object. Like a rubber band, the magnetic field connects neighboring layers that rotate at different speeds. It accelerates the slow particles of matter at the edges and slows down the fast ones on the inside. There the centrifugal force is not strong enough and the matter collapses into the center. Near the solar equator it behaves precisely the other way around. The inner layers move more slowly than the outer ones. Up to now, experts had considered this kind of flow profile to be physically extremely stable.

The researchers at HZDR, the University of Leeds and AIP still decided to investigate it more thoroughly. In the case of a circular magnetic field, they had already calculated that even when fluids and gases were rotating faster on the outside, magnetic instability could occur. However, only under unrealistic conditions: the rotational speed would have to increase too strongly towards the outer edge.

Trying another approach, they now based their investigations on a helical magnetic field. “We didn’t have any great expectations, but then we were in for a genuine surprise,” HZDR’s Dr. Frank Stefani remembers — because the magnetic instability can already occur when the speed between the rotating layers of plasma only increases slightly — which happens in the region of the Sun closest to the equator.

“This new instability could play an important role in generating the sun’s magnetic field,” Stefani estimates. “But in order to confirm it we first need to do further numerically complicated calculations.” Prof. Günther Rüdiger of AIP adds, “Astrophysicists and climate researchers still hope to better understand the cycle of sunspots. Perhaps the ‘Super HMRI’ we have now found will take us a decisive step forward. We’ll check it out.”

With its various specialisms in magnetohydrodynamics and astrophysics, the interdisciplinary research team has been investigating magnetic instabilities — in the lab, on paper and with the aid of sophisticated simulations — for more than 15 years. The scientists want to improve physical models, understand cosmic magnetic fields and develop innovative liquid metal batteries. Thanks to close cooperation, in 2006, they managed to experimentally prove the theory of magnetorotational instability for the first time. They are now planning the test for the special form they have predicted in theory: In a large-scale experiment that is currently being set up in the DRESDYN project at HZDR, they want to study this magnetic instability in the lab.