A quartet of researchers from the University of Rochester and the University of California has found evidence of the starting period for the solidification of Earth’s core. In their paper published in the journal Nature Geoscience, Richard Bono, John Tarduno, Francis Nimmo and Rory Cottrell describe their analysis of ancient crystals found in eastern Canada, what they found, and why they believe their results offer clues about the formation of Earth’s inner core. Peter Driscoll, with the Carnegie Institution for Science, has written a News and Views piece on the study in the same journal issue. 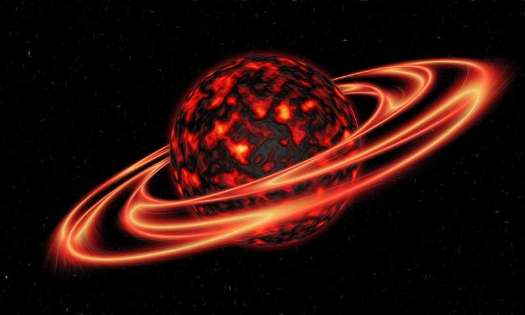 Planetary scientists have found strong evidence that suggests the Earth has an inner and an outer core. The inner core is believed to be solid, while the outer core is made up of molten material. Prior evidence has also indicated that the entire core was once liquid, but as the interior cooled, the innermost part began to crystallize. It is at this point that scientists disagree—some suggest the start of solidification began as far back as 2.5 billion years ago. Others believe it was much more recent—perhaps as recent as just 500 million years ago. In this new effort, the researchers have found evidence that supports the latter theory.

The work by the researchers involved carefully analyzing plagioclase and clinopyroxene crystals, which have been dated to approximately 565 million years ago. The crystals are important because they contain bits of metal called inclusions. The inclusions are very small and needle-shaped and aligned themselves with the Earth’s magnetic field as they became embedded in the crystal. Since the Earth’s magnetic field is generated by activity in the inner core, the inclusions are a means of determining the state of the core during the time when the crystals formed. The researchers report that their analysis showed that the magnetic field was significantly weaker than it is today, suggesting that solidification of the core must have occurred soon thereafter or the magnetic field would have collapsed altogether. The reason it did not, theory suggests, is because as the inner core solidified, he magnetic field became stronger.