University of Wyoming scientists have found evidence of continental collisions in Wyoming’s Teton Range, similar to those in the Himalayas, dating to as early as 2.68 billion years ago. 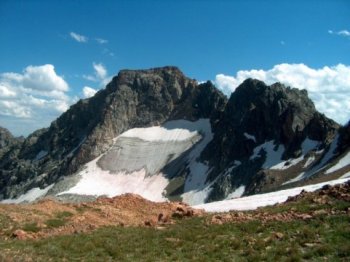 The research, published Jan. 22 in the journal Geochimica et Cosmochimica Acta, shows that plate tectonics were operating in what is now western Wyoming long before the collisions that created the Himalayas starting 40 million years ago.

In fact, the remnants of tectonic activity in old rocks exposed in the Tetons point to the world’s earliest known continent-continent collision, says Professor Carol Frost of UW’s Department of Geology and Geophysics, lead author of the paper.

“While the Himalayas are the prime example of continent-continent collisions that take place due to plate tectonic motion today, our work suggests plate tectonics operated far, far back into the geologic past,” Frost says.

The researchers reached their conclusions by analyzing ancient, exposed granite in the northern Teton Range and comparing it to similar rock in the Himalayas. The rocks were formed from magma produced by what is known as decompression melting, a process that commonly occurs when two continental tectonic plates collide. The dramatically thickened crust extends under gravitational forces, and melting results when deeper crust rises closer to the surface.

While the Tetons are a relatively young mountain range, formed by an uplift along the Teton Fault less than 9 million years ago, the rocks exposed there are some of the oldest found in North America.

The UW scientists found that the mechanisms that formed the granites of the Tetons and the Himalayas are comparable, but that there are significant differences between the rocks of the two regions. That is due to differences in the composition of the continental crust in Wyoming 2.68 billion years ago compared to crustal plates observed today. Specifically, the ancient crust that melted in the Tetons contained less potassium than the more recently melted crust found in the Himalayas.