A GEOLOGIC ONE-TWO punch rocked the South Pacific in September 2009, as a magnitude 8.1 earthquake struck off the coast of the island nation of Samoa, followed mere moments later by a similarly intense temblor. A towering tsunami soon crashed onto the shores of islands nearby, leaving more than 180 dead and communities in ruins in Samoa, the neighboring U.S. territory of American Samoa, and surrounding islands. 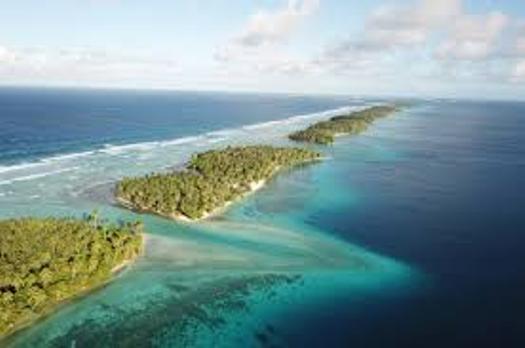 But a new study, published in the Journal of Geophysical Research: Solid Earth, reveals that the quakes also sparked a slow-burning danger for the more than 55,000 residents of American Samoa: sea level rise that is five times as fast as the global average.

Like other island and coastal regions around the world, Samoa and American Samoa are facing encroaching waters as our warming world sends sea levels soaring at accelerating rates. In the wake of the mega-quakes, though, the researchers discovered that these Pacific islands are also sinking. The situation is particularly concerning for American Samoa, where the team estimates that, over the next 50 to a hundred years, local sea levels could rise by roughly a foot in addition to the anticipated effects of climate change.

While the contributions of big earthquakes won’t be the same everywhere, the discovery emphasizes the sometimes overlooked effects that geology can have on the increasing number of people around the world who call coastlines home. (Also find out how powerful quakes are priming the region around Mount Everest for a huge disaster.)

“Everybody is talking about climate change issues … but they overlooked the impact of the earthquake and associated land subsidence,” says study leader Shin-Chan Han of the University of Newcastle, Australia, referring to documents from regional governments on sea level rise.

“This is a really important thing to point out,” says geophysicist Laura Wallace of the geoscience consultancy firm GNS Science, Te Pū Ao, in New Zealand, who was not involved in the study. “It obviously has a big impact on the relative sea level changes people are going to see in places like [the Samoan islands].”

Plate tectonics is constantly reshaping the surface of our planet—a role particularly evident during an earthquake. Generally speaking, these events occur where tectonic plates are colliding or sliding against each other, building up geologic stress. When that pent-up energy is released suddenly, it can send blocks of the planet’s crust careening out of place. (Find out how smaller “hidden” earthquakes are affecting California.)

But not all the change from a big earthquake is immediate. Unlike the rigid crust, the rocks of the mantle below flow like cold molasses and gradually adjust to the sudden surface jolt, Wallace says. This can cause either sinking or uplift of the land that can continue for decades after a temblor strikes.

This prolonged landscape deformation is what intrigues Han. For years, he’s scoured data from the Gravity Recovery and Climate Experiment, or GRACE, satellites to hunt for the rise and fall of land after a quake. This satellite duo orbited Earth in a line from 2002 to 2017 and precisely tracked the gap between the spacecraft. As they passed over zones with slightly more mass, and thus stronger gravity, the leading craft would feel the tug just before the trailing one. This tweaked the space in between and registered as a wobble in the planet’s gravitational field that can reveal changes in the landmass below.

In the case of the 2009 earthquake, such changes were minute on a day-to-day basis. But eventually, the effects were large enough that Han saw something strange happening in the Samoan islands while poring over the GRACE data.

The 2009 event was a particularly unusual earthquake that initially baffled scientists, since the pair of powerful temblors ripped through the Earth nearly at the same time. One broke along a so-called normal fault, created due to the flex of the oceanic crust as it plunges under another tectonic plate in what’s known as a subduction zone. Another quake broke within the subduction zone due to the compressive forces of the colliding plates.

The researchers investigated the lingering impacts of these quakes using a combination of GRACE data and local GPS and tide gauge records. They then built a computer model to tease apart the complex interplay between the temblors and what is happening at the surface.

This data showed slow sinking of the landscape, driven primarily by the normal-fault quake. This particular earthquake causes one side of the landscape to fall in relation to the other, which sent the nearby islands sinking downward.

The team found that nearly a decade after the event, the island of Samoa has sunk by roughly 0.4 inches a year. The situation is particularly acute for American Samoa, which has seen more than 0.6 inches of subsidence each year, and it doesn’t look like it’s stopping anytime soon.

The pace outstrips the estimated rate of global sea level rise, which is creeping upward at some 0.13 inches a year. Flooding and seawater intrusion in freshwater aquifers are already grave concerns for residents of American Samoa, Han says, and the latest find only adds to the worry.

This latest study emphasizes the need for greater awareness and continued monitoring to mitigate the potential effects of mega-quakes, Wallace says. However, predicting such sea level effects before an earthquake strikes is not feasible, since earthquake prediction itself remains elusive.

“This might be a problem that suddenly causes you heartburn next week,” Freymueller says, “or it might not cause any problem for the next century.”

This latest study emphasizes the need for greater awareness and continued monitoring to mitigate the potential effects of mega-quakes, Wallace says. However, predicting such sea level effects before an earthquake strikes is not feasible, since earthquake prediction itself remains elusive.

“This might be a problem that suddenly causes you heartburn next week,” Freymueller says, “or it might not cause any problem for the next century.”