Hurricane Lorenzo became the most intense hurricane so far east in the Atlantic Ocean on record Thursday night, and poses a danger to the Azores next week. 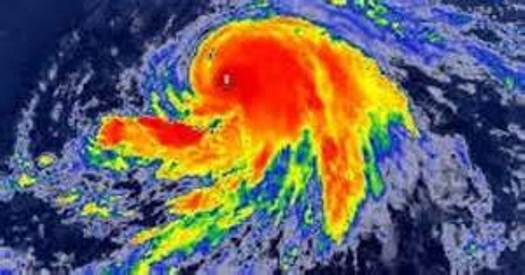 According to Dr. Phil Klotzbach, a tropical scientist at Colorado State University, Lorenzo became the most intense hurricane east of 45 degrees West longitude in the historical record.

Lorenzo is even a bigger outlier when considering only those Category 4 hurricanes from Sept. 26 through the end of the season, as pointed out by Richard Dixon, a meteorologist at CatInsight and Michael Lowry, an atmospheric scientist at FEMA.

Even in the heart of hurricane season, tropical waves moving off the coast of western Africa usually take some time to mushroom into intense hurricanes.

This is often due to intrusions of dry air, known as Saharan air layers, moving off Africa’s Sahara Desert. Fledgling tropical disturbances need warm, moist air to intensify, so battling these intrusions can prevent intensification or even spell doom in the eastern Atlantic Ocean.

In Lorenzo’s case, that wasn’t a big problem.

Lorenzo strengthened from a tropical storm on Tuesday into a hurricane on Wednesday, before reaching Category 4 hurricane strength by late Thursday morning.

Azores Threat
The storm is no immediate threat to land, but it is forecast to pass near the Azores Tuesday night or early Wednesday as a weaker, but still formidable hurricane.

The National Hurricane Center mentioned Lorenzo’s wind field is large, increasing the chances it may impact the group of Portuguese islands about 900 miles west of Portugal.

NHC forecaster Eric Blake tweeted Thursday its size resembled that of a super typhoon in the western Pacific Ocean than an eastern Atlantic hurricane.

According to NOAA’s historical database, only seven Category 2 or stronger hurricanes have tracked within 200 nautical miles of the Azores, in records dating to the mid-19th century.

Ophelia passed south the Azores as a Category 3 hurricane in mid-October 2017, but produced tropical storm-force winds, downing a few trees and triggering some minor flooding, according to the NHC’s final report.

A September 1926 Category 2 hurricane with estimated winds of 105 mph tracked over the island of São Miguel.

As meteorologist Yaakov Cantor mentioned Thursday, there have been a number of strange eastern Atlantic hurricanes and tropical storms in recent years, including Leslie almost making it to Portugal as a hurricane in 2018 and a bizarre January strike from Hurricane Alex in the Azores.