Indian astronomers have recently conducted spectrographic observations of long-period Comet Lovejoy to study its gas emission. They found that this comet showcases an asymmetric behavior at perihelion and an increase in the activity during the post-perihelion phase. The findings were detailed in a paper published July 22 on the arXiv pre-print server. 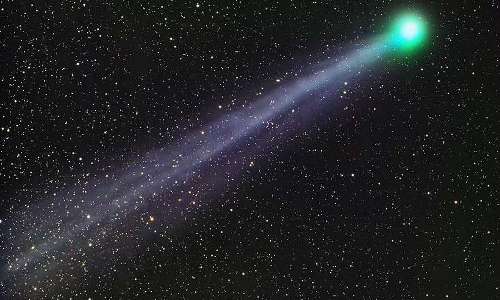 Comet Lovejoy, formally designated C/2014 Q2, is an Oort cloud comet, discovered by Terry Lovejoy in August 2014. Its perihelion was on January 30, 2015 at a heliocentric distance of 1.29 AU, offering astronomers an excellent opportunity to observe its activity—in particular, the emission of numerous organic molecules in gas.

The scientists, led by Kumar Venkataramani of the Physical Research Laboratory in Ahmedabad, India, utilized the LISA spectrograph to obtain spectra of the comet. LISA is a low-resolution, high luminosity spectrograph, designed for the spectroscopic study of faint and extended objects. The instrument is installed on the 0.5 m telescope at the Mount Abu Infra-Red Observatory (MIRO), Mount Abu, India.

The observation campaign lasted from January to May 2015. It covered the period during which the comet’s heliocentric distance varied from 1.29 AU, just prior to perihelion, to around 2.05 AU post perihelion. The spectra obtained by the researchers show strong molecular emission bands of diatomic carbon, tricarbon, cyanide, amidogen, hydridocarbon and neutral oxygen.

“Various molecular emission lines like C2, C3, CN, NH2, CH, O were clearly seen in the comet spectrum throughout this range. The most prominent of them being the C2 molecule, which was quite dominant throughout the time that we have followed the comet. Apart from the C2 emission band, those of CN and C3 were also quite prominent,” the scientist wrote in the paper.

When a cold icy body like the Comet Lovejoy passes by the sun near perihelion, its ices start sublimating, releasing a mixture of gas and dust, which form the coma. Studying these emissions is crucial for scientists as comets could hold the key to our understanding of the solar system’s evolution and the origin of life in the universe. Therefore, the abundance of volatile material in comets is the target of many scientific studies that seek to reveal the secrets of planet formation and demonstrate the conditions that occurred when our solar system was born.

According to the study, the gas production rate increased after perihelion and exhibited a decreasing trend only after February 2015. The researchers also noted a simultaneous increase in gas and dust, indicating an increase in the overall activity of the comet after its perihelion passage.

“This kind of asymmetry has been seen in many comets. (…) Although we do not have data points at exactly the same distance for pre- and post-perihelion passages, we can, perhaps, say that this comet may have a large positive asymmetry,” the paper reads.

However, as the team noted, more exhaustive study is required to confirm their conclusions.