The molten rock that feeds volcanoes can be stored in the Earth’s crust for as long as a thousand years, a result which may help with volcanic hazard management and better forecasting of when eruptions might occur. 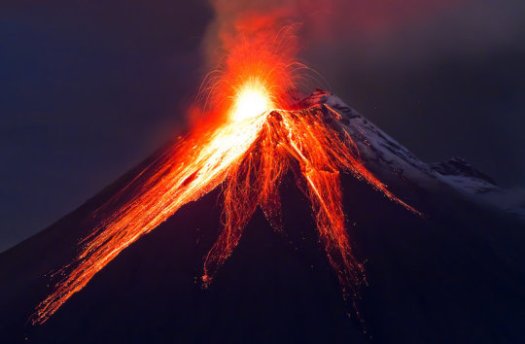 Researchers from the University of Cambridge used volcanic minerals known as ‘crystal clocks’ to calculate how long magma can be stored in the deepest parts of volcanic systems. This is the first estimate of magma storage times near the boundary of the Earth’s crust and the mantle, called the Moho. The results are reported in the journal Science.

“This is like geological detective work,” said Dr Euan Mutch from Cambridge’s Department of Earth Sciences, and the paper’s first author. “By studying what we see in the rocks to reconstruct what the eruption was like, we can also know what kind of conditions the magma is stored in, but it’s difficult to understand what’s happening in the deeper parts of volcanic systems.”

“Determining how long magma can be stored in the Earth’s crust can help improve models of the processes that trigger volcanic eruptions,” said co-author Dr John Maclennan, also from the Department of Earth Sciences. “The speed of magma rise and storage is tightly linked to the transfer of heat and chemicals in the crust of volcanic regions, which is important for geothermal power and the release of volcanic gases to the atmosphere.”

The researchers studied the Borgarhraun eruption of the Theistareykir volcano in northern Iceland, which occurred roughly 10,000 years ago, and was fed directly from the Moho. This boundary area plays an important role in the processing of melts as they travel from their source regions in the mantle towards the Earth’s surface. To calculate how long the magma was stored at this boundary area, the researchers used a volcanic mineral known as spinel like a tiny stopwatch or crystal clock.

Using the crystal clock method, the researchers were able to model how the composition of the spinel crystals changed over time while the magma was being stored. Specifically, they looked at the rates of diffusion of aluminium and chromium within the crystals and how these elements are ‘zoned’.

“Diffusion of elements works to get the crystal into chemical equilibrium with its surroundings,” said Maclennan. “If we know how fast they diffuse we can figure out how long the minerals were stored in the magma.”

The researchers looked at how aluminium and chromium were zoned in the crystals, and realised that this pattern was telling them something exciting and new about magma storage time. The diffusion rates were estimated using the results of previous lab experiments. The researchers then used a new method, combining finite element modelling and Bayesian nested sampling to estimate the storage timescales.

“We now have really good estimates in terms of where the magma comes from in terms of depth,” said Mutch. “No one’s ever gotten this kind of timescale information from the deeper crust.”

Calculating the magma storage time also helped the researchers determine how magma can be transferred to the surface. Instead of the classical model of a volcano with a large magma chamber beneath, the researchers say that instead, it’s more like a volcanic ‘plumbing system’ extending through the crust with lots of small ‘spouts’ where magma can be quickly transferred to the surface.

A second paper by the same team, recently published in Nature Geoscience, found that that there is a link between the rate of ascent of the magma and the release of CO2, which has implications for volcano monitoring.

The researchers observed that enough CO2 was transferred from the magma into gas over the days before eruption to indicate that CO2 monitoring could be a useful way of spotting the precursors to eruptions in Iceland. Based on the same set of crystals from Borgarhraun, the researchers found that magma can rise from a chamber 20 kilometres deep to the surface in as little as four days.

The research was supported by the Natural Environment Research Council (NERC).