An undersea earthquake occurred Saturday off the coast of the southern Philippines. The U.S. Geological Survey says it struck at a depth of about 38 miles and had a magnitude of 7.0. According to The Associated Press, no casualties or damage had been reported as of a few hours after the quake. 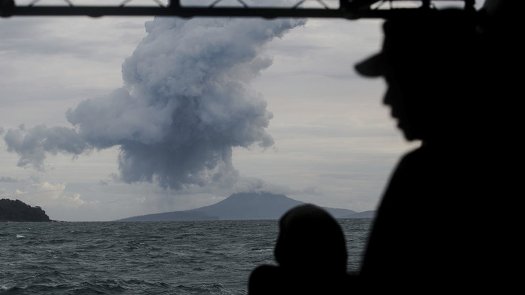 It was felt in several cities in the southern Philippines and led the Pacific Tsunami Warning Center to issue a tsunami threat – which has since been lifted — for areas along the coasts of Indonesia and the Philippines.

This most recent scare, which seemed to cause little damage, is the latest seismic activity in a region reeling from disaster. On Dec. 22, a tsunami hit Indonesia and killed at least 430 people. NPR’s Anthony Kuhn reported that Indonesia’s seismic activity directors were faulty, which meant that residents were not properly warned. Kuhn also noted that Indonesians did not feel an earthquake, a common warning sign, before the tsunami struck.

A widely shared video of a concert is one of the more unsettling illustrations of how unexpected the disaster was: The local pop-rock band Seventeen was performing at a party in Java one moment and taken by a massive wave the next.

Now scientists might know why last Saturday’s disaster happened. According to a statement from the European Geosciences Union, the partial collapse of Anak Krakatau, a volcano in Indonesia’s Sunda Strait, may have caused the tsunami. Researcher Raphaël Paris says Anak Krakatau’s instability will continue to pose a risk. In the EGU statement, Paris says, “There is a big uncertainty on the stability of the volcanic cone now and the probability for future collapses and tsunamis is perhaps non-negligible.”

When Anak Krakatau lost a 64-hectare portion of its west-southwest flank, tons of rocky debris fell into the sea and brought forth powerful waves. This, according to the BBC’s Jonathan Amos, could have been the source. NPR’s Julie McCarthy reports that researchers say the volcanic cone has decreased in height from 1,108 feet to just 336 feet. Satellite images also show a significant decrease in Anak Krakatau’s size.

Paris was part of a team that modeled a very similar Anak Krakatau-induced tsunami back in 2012. Mike Burton, president of the EGU Division on Geochemistry, Mineralogy, Petrology and Volcanology, said in the EGU’s statement: “The hazard scenario were therefore understood, but the management of such a hazard obviously remains a major challenge.”

The exact details of the tsunami’s cause — the nature of the eruption that triggered the loss of the flank, for example — will not be determined until researchers can access the area of the volcano, according to the BBC’s Amos.

Anak Krakatau translates to “child of Krakatau.” Anak’s parent, Krakatau (or Krakatoa), is perhaps best known for exploding in 1883. According to Hawaii Public Radio’s Neal Conan, about 100,000 people died from that eruption’s direct effects and more than 35,000 others died from resulting tsunami waves. Anak Krakatau was formed from what remained of Krakatau.

Less than three months ago, another tsunami in Indonesia killed at least 1,400 others. And in August, a 6.9 magnitude earthquake killed at least 460. A statement issued in October by Indonesia’s National Agency for Disaster Management said 1,999 natural disasters occurred in Indonesia in 2018, leaving 3,548 dead or missing.