We already know that climate change influences such Earth processes as erosion and fluctuations in sea levels. But do surface processes in turn have an influence on volcanic activity? This was the question raised by geologists from the University of Geneva (UNIGE, Switzerland) and international collaborators. The researchers analysed volcanic data from the Messinian salinity crisis in the Mediterranean Sea, when the Strait of Gibraltar was blocked and the Mediterranean temporarily isolated from the Atlantic. After observing a sharp rise in volcanic activity during this period, and testing various scenarios, the geologists concluded that the increase in magmatic activity could only be explained by the almost total drying out of the Mediterranean. These results, published in Nature Geoscience, reveal the influence of surface processes, largely controlled by climate, on volcanic activity. 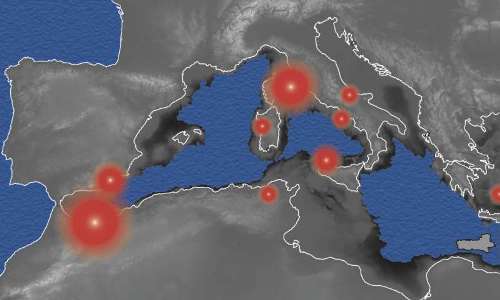 It is known that the Strait of Gibraltar was temporarily shut during the Messinian Era (more precisely, from 5.96 to 5.33 million years ago) and that the Mediterranean Sea was isolated from the Atlantic. In fact, as far back as the 1970s, scientists have found layers of salt several hundred metres thick on the seabed. The only explanation is that there was very limited connection between the Mediterranean and the Atlantic. The scientists also discovered huge underwater canyons dating back to the same period, hollowed out by rivers running over land that is now submerged, suggesting that the sea level was much lower at the time. This also points to the massive drying up of the Mediterranean with enormous geographical and climatic disruption across the entire basin. This hypothesis, however, continues to be a source of debate.

Nevertheless, a team of UNIGE-led geologists has provided new evidence of the Mediterranean’s drying up and the forcing of surface processes on magmatic activity. “We understand that what happens at the Earth’s surface, such as a sudden sea level lowering, causes the pressure to change at depth and has an effect on magma production,” says Pietro Sternai, researcher in the Department of Earth Sciences in UNIGE’s Science Faculty. Given that the salinity crisis was capable of generating these changes in pressure, the geologists, working on the hypothesis that the Mediterranean dried out, studied the changes in volcanic activity during this period.

When a volcano erupts, the magma cools on the Earth’s surface and the minerals crystallise. Based on these silent witnesses of volcanic activity, the scientists were able to establish that there were 13 eruptions around the Mediterranean between 5.9 and 5.3 million years ago. This is over twice the average activity, which is around 4.5 eruptions over a longer time length encompassing the salinity crisis. Why is the figure so high? “The single logical explanation,” suggests Sternai, “is the hypothesis that the sea dried out, since this is the only event powerful enough to alter the Earth’s pressure and magmatic production over the entire Mediterranean.”

The geologists used numerical models to test the hypothesis that the Mediterranean dried up. They reproduced the history of the charging and discharging of the weight of water and sediment in the Mediterranean as it was drying out. Then they calculated the changes in pressure at depth and the impact on magma production.

Two scenarios were examined: The first factored in the salinity crisis with drastic lowering of the sea level, and the second excluded the drawdown. “The simulations showed that the only way to account for the proven increase in volcanic activity was that the level (and thus the weight) of the Mediterranean Sea dropped by about two kilometres,” explains Sternai. “I leave it to you to imagine what the landscape looked like.”

In addition to providing further evidence of the drying out of the Mediterranean, the research also demonstrates the impact of climate change on the deep Earth. Climate change influences magmatic production, in particular via the effects on erosion and hydrology, which modify the pressure exerted at the Earth’s surface on the deep layers. Although we have been aware of the impact of volcanism on the climate for quite some time, the results presented in the study have disclosed that the opposite is also possible. “This pioneering work opens up new perspectives for interdisciplinary studies about the coupling between the solid Earth and the fluid Earth, and—for example—involving volcanologists, geomorphologists and climatologists,” concludes Sternai.