BEIJING – Typhoon Khanun is likely to hit southern China early Monday with winds of up to 114 kph (70 mph), China’s meteorological agency said, as authorities in the financial hub of Hong Kong raised the third-highest weather warning. 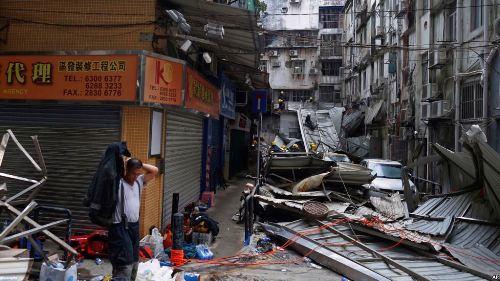 The typhoon is expected to make landfall between Zhanjiang, in Guangdong province, and Wenchang, in Hainan province, the official Xinhua News Agency cited the National Meteorological Center as saying.

The agency has issued an orange alert, the second highest in China’s four-tier, color-coded alert system for severe weather, with red being the most severe, followed by orange, yellow and blue.

From Sunday to Monday morning, parts of Zhejiang, Guangdong, Guangxi and Hainan provinces will be drenched in heavy rain, Xinhua warned. In some areas, precipitation is expected to be up to 200 millimetres (7.8 inches), it said.

In Hong Kong, some transport services were disrupted Sunday because of strong wind. Ferries linking Hong Kong, to Macau and nearby islands, were suspended while some flights to Taiwan and mainland China were canceled, transport authorities said.

The storm comes about two months after Typhoon Hato, a maximum category 10 storm, caused havoc in Hong Kong and deaths in nearby Macau, with extensive flooding and disruption to transport.

Xinhua said in Hainan, high-speed train services were suspended from early Sunday, while ferries on the Qiongzhou Strait, which connects the island province with Guangdong on the mainland, were suspended on Saturday, Xinhua said.