For centuries, scientists have worked to understand the makeup of Jupiter. It’s no wonder: this mysterious planet is the biggest one in our solar system by far, and chemically, the closest relative to the Sun. Understanding Jupiter is a key to learning more about how our solar system formed, and even about how other solar systems develop. 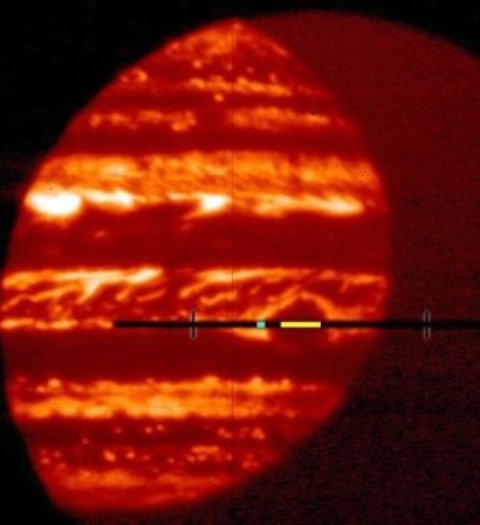 But one critical question has bedeviled astronomers for generations: Is there water deep in Jupiter’s atmosphere, and if so, how much?

Gordon L. Bjoraker, an astrophysicist at NASA’s Goddard Space Flight Center in Greenbelt, Maryland, reported in a recent paper in the Astronomical Journal that he and his team have brought the Jovian research community closer to the answer.

By looking from ground-based telescopes at wavelengths sensitive to thermal radiation leaking from the depths of Jupiter’s persistent storm, the Great Red Spot, they detected the chemical signatures of water above the planet’s deepest clouds. The pressure of the water, the researchers concluded, combined with their measurements of another oxygen-bearing gas, carbon monoxide, imply that Jupiter has 2 to 9 times more oxygen than the sun. This finding supports theoretical and computer-simulation models that have predicted abundant water (H2O) on Jupiter made of oxygen (O) tied up with molecular hydrogen (H2).

The revelation was stirring given that the team’s experiment could have easily failed. The Great Red Spot is full of dense clouds, which makes it hard for electromagnetic energy to escape and teach astronomers anything about the chemistry within.

“It turns out they’re not so thick that they block our ability to see deeply,” said Bjoraker. “That’s been a pleasant surprise.”

New spectroscopic technology and sheer curiosity gave the team a boost in peering deep inside Jupiter, which has an atmosphere thousands of miles deep, Bjoraker said: “We thought, well, let’s just see what’s out there.”

The data Bjoraker and his team collected will supplement the information NASA’s Juno spacecraft is gathering as it circles the planet from north to south once every 53 days.

Among other things, Juno is looking for water with its own infrared spectrometer and with a microwave radiometer that can probe deeper than anyone has seen — to 100 bars, or 100 times the atmospheric pressure at Earth’s surface. (Altitude on Jupiter is measured in bars, which represent atmospheric pressure, since the planet does not have a surface, like Earth, from which to measure elevation.)

“If it works, then maybe we can apply it elsewhere, like Saturn, Uranus or Neptune, where we don’t have a Juno,” she said.

Juno is the latest spacecraft tasked with finding water, likely in gas form, on this giant gaseous planet.

Water is a significant and abundant molecule in our solar system. It spawned life on Earth and now lubricates many of its most essential processes, including weather. It’s a critical factor in Jupiter’s turbulent weather, too, and in determining whether the planet has a core made of rock and ice.

Jupiter is thought to be the first planet to have formed by siphoning the elements left over from the formation of the Sun as our star coalesced from an amorphous nebula into the fiery ball of gases we see today. A widely accepted theory until several decades ago was that Jupiter was identical in composition to the Sun; a ball of hydrogen with a hint of helium — all gas, no core.

But evidence is mounting that Jupiter has a core, possibly 10 times Earth’s mass. Spacecraft that previously visited the planet found chemical evidence that it formed a core of rock and water ice before it mixed with gases from the solar nebula to make its atmosphere. The way Jupiter’s gravity tugs on Juno also supports this theory. There’s even lightning and thunder on the planet, phenomena fueled by moisture.

“The moons that orbit Jupiter are mostly water ice, so the whole neighborhood has plenty of water,” said Bjoraker. “Why wouldn’t the planet — which is this huge gravity well, where everything falls into it — be water rich, too?”

The water question has stumped planetary scientists; virtually every time evidence of H2O materializes, something happens to put them off the scent. A favorite example among Jupiter experts is NASA’s Galileo spacecraft, which dropped a probe into the atmosphere in 1995 that wound up in an unusually dry region. “It’s like sending a probe to Earth, landing in the Mojave Desert, and concluding the Earth is dry,” pointed out Bjoraker.

In their search for water, Bjoraker and his team used radiation data collected from the summit of Maunakea in Hawaii in 2017. They relied on the most sensitive infrared telescope on Earth at the W.M. Keck Observatory, and also on a new instrument that can detect a wider range of gases at the NASA Infrared Telescope Facility.

The idea was to analyze the light energy emitted through Jupiter’s clouds in order to identify the altitudes of its cloud layers. This would help the scientists determine temperature and other conditions that influence the types of gases that can survive in those regions.

To confirm this through ground-based observations, Bjoraker’s team looked at wavelengths in the infrared range of light where most gases don’t absorb heat, allowing chemical signatures to leak out. Specifically, they analyzed the absorption patterns of a form of methane gas. Because Jupiter is too warm for methane to freeze, its abundance should not change from one place to another on the planet.

Bjoraker’s team found evidence for the three cloud layers in the Great Red Spot, supporting earlier models. The deepest cloud layer is at 5 bars, the team concluded, right where the temperature reaches the freezing point for water, said Bjoraker, “so I say that we very likely found a water cloud.” The location of the water cloud, plus the amount of carbon monoxide that the researchers identified on Jupiter, confirms that Jupiter is rich in oxygen and, thus, water.

Bjoraker’s technique now needs to be tested on other parts of Jupiter to get a full picture of global water abundance, and his data squared with Juno’s findings.

“Jupiter’s water abundance will tell us a lot about how the giant planet formed, but only if we can figure out how much water there is in the entire planet,” said Steven M. Levin, a Juno project scientist at NASA’s Jet Propulsion Laboratory in Pasadena, Calif.