A small asteroid has been caught in the process of spinning so fast it’s throwing off material, according to new data from NASA’s Hubble Space Telescope and other observatories. 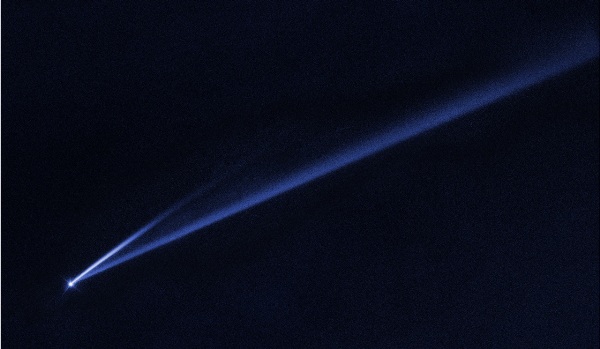 Images from Hubble show two narrow, comet-like tails of dusty debris streaming from the asteroid (6478) Gault. Each tail represents an episode in which the asteroid gently shed its material—key evidence that Gault is beginning to come apart.

Discovered in 1988, the 2.5-mile-wide (4-kilometer-wide) asteroid has been observed repeatedly, but the debris tails are the first evidence of disintegration. Gault is located 214 million miles (344 million kilometers) from the Sun. Of the roughly 800,000 known asteroids between Mars and Jupiter, astronomers estimate that this type of event in the asteroid belt is rare, occurring roughly once a year.

Watching an asteroid become unglued gives astronomers the opportunity to study the makeup of these space rocks without sending a spacecraft to sample them.

“We didn’t have to go to Gault,” explained Olivier Hainaut of the European Southern Observatory in Germany, a member of the Gault observing team. “We just had to look at the image of the streamers, and we can see all of the dust grains well-sorted by size. All the large grains (about the size of sand particles) are close to the object and the smallest grains (about the size of flour grains) are the farthest away because they are being pushed fastest by pressure from sunlight.”

Gault is only the second asteroid whose disintegration has been strongly linked to a process known as a YORP effect. (YORP stands for “Yarkovsky-O’Keefe-Radzievskii-Paddack,” the names of four scientists who contributed to the concept.) When sunlight heats an asteroid, infrared radiation escaping from its warmed surface carries off angular momentum as well as heat. This process creates a tiny torque that can cause the asteroid to continually spin faster. When the resulting centrifugal force starts to overcome gravity, the asteroid’s surface becomes unstable, and landslides may send dust and rubble drifting into space at a couple miles per hour, or the speed of a strolling human. The researchers estimate that Gault could have been slowly spinning up for more than 100 million years.

Piecing together Gault’s recent activity is an astronomical forensics investigation involving telescopes and astronomers around the world. All-sky surveys, ground-based telescopes, and space-based facilities like the Hubble Space Telescope pooled their efforts to make this discovery possible.

The initial clue was the fortuitous detection of the first debris tail, observed on Jan. 5, 2019, by the NASA-funded Asteroid Terrestrial-Impact Last Alert System (ATLAS) telescope in Hawaii. The tail also turned up in archival data from December 2018 from ATLAS and the Panoramic Survey Telescope and Rapid Response System (Pan-STARRS) telescopes in Hawaii. In mid-January, a second shorter tail was spied by the Canada-France-Hawaii Telescope in Hawaii and the Isaac Newton Telescope in Spain, as well as by other observers. An analysis of both tails suggests the two dust events occurred around Oct. 28 and Dec. 30, 2018.

Follow-up observations with the William Herschel Telescope and ESA’s (European Space Agency) Optical Ground Station in La Palma and Tenerife, Spain, and the Himalayan Chandra Telescope in India measured a two-hour rotation period for the object, close to the critical speed at which a loose “rubble-pile” asteroid begins to break up.