Areas of the US devastated by Hurricane Michael last week are continuing to count the storm’s cost as the number of confirmed dead rises. 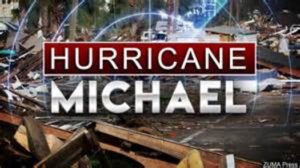 At least 27 deaths have been blamed on the hurricane across four US states – a number expected to increase further.

A volunteer organisation has said it is trying to find more than 1,100 people believed to be unaccounted for.

The storm destroyed buildings and flattened communities as it tore through the Florida panhandle region.

Most of the missing are said to be in Panama City and are elderly, disabled or live alone, co-founder of Houston-based CrowdSource Rescue Matthew Marchetti told the Reuters news agency.

That number has not been confirmed by regional officials, and the Florida Department of Health has created an online form for people to report friends and loved ones missing.

US President Donald Trump and First Lady Melania visited the storm-affected region in Florida and Georgia on Monday.

As of Wednesday morning, more than 150,000 homes and businesses were still reported to be without power.

There were also reports of armed looting of homes and businesses in some areas.

A major at Bay County’s Sheriff’s office, Jimmy Stanford, said that local police there had arrested about 10 suspected looters every night since Friday.