BALI, Indonesia – Experts say a suddenly active volcano on the Indonesian tourist island of Bali is more likely to erupt than not. 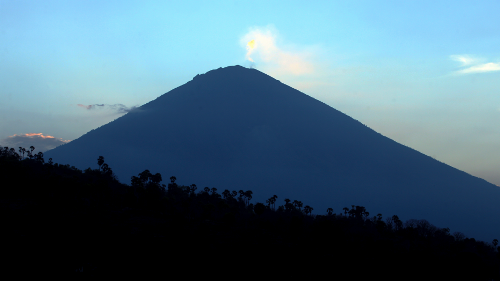 But because every volcano has its own unique characteristics, scientists can’t predict when that will be with total certainty. It could erupt suddenly or continue for weeks at its current menacing level of seismic activity.

The slow movement of the tectonic plates that make up the planet’s surface carries massive quantities of rock deep into the earth, where they melt. As this molten magma rises, pressure increases inside a sealed chamber beneath the mountain until it explodes.

The type of magma that feeds Mount Agung traps more gas, which tends to produce larger eruptions. It’s the rising volume of magma that is causing hundreds of tremors being recorded daily around the mountain.

“The volcano is bulging, causing a large number of small cracks to form and the earth to vibrate,” said David Boutelier, a geologist and expert on plate tectonics at Australia’s University of Newcastle.

HOW SOON COULD IT ERUPT?

Disaster officials said instruments recorded more than 800 volcanic earthquakes on Wednesday. Many of the quakes in the past week have been strong enough to be felt by people in the surrounding region.

In theory, the current level of activity could go on for some time without an eruption. It is difficult to predict because each volcano behaves differently.

“It could continue for the next few days or weeks, but an eruption could also happen any time given its condition is very critical,” said Gede Swantika, head of volcanology at Indonesia’s Center for Volcanology and Geological Disaster Mitigation.

Heather Handley, an earth sciences specialist at Sydney’s Macquarie University, said Agung’s last eruption in 1963 was preceded by earthquakes, small ash eruptions and lava flow. “It is hard to know for sure what will happen this time,” she said.

WHAT ARE THE CHANCES IT WILL ERUPT?

Authorities raised the volcano’s alert status to the highest level on Sept. 15 and announced a no-go zone that extends up to 12 kilometers (7.5 miles) from the crater. More than 130,000 people have fled, including some who live farther away.

“We could say that the chance of an eruption is very high, above 50 percent,” said Swantika.

Entering the exclusion zone would be extraordinarily risky.

“I would not go now. The activity is too high and the risk much too large,” Boutelier said. The pyroclastic flow, a rush of hot gas, ash and other volcanic material, would “kill everyone in its path in a few seconds,” he added.

It’s possible the volcano could calm back down, but that is unlikely without pressure being released in some way.

Handley said there were signs of activity such as gas releases and earthquakes in 1989 and swelling of the volcano between 2007 and 2009 without any subsequent eruptions.

But this time around, the buildup of activity is much more significant, she said.

“It is unlikely that the volcano goes quiet without the pressure being released one way or another,” said Boutelier. “We can hope for a lava flow, which would allow pressure to decrease without the hazard of an explosion.”