A 7.3-magnitude earthquake has jolted South Halmahera regency in North Maluku. According to the United States Geological Survey (USGS), the quake occurred at 4:10 p.m. Jakarta time or 6:10 p.m. local time, 102 kilometers north-northeast of Laiwui in South Halmahera, at a depth of 10 kilometers.

The Meteorology, Climatology and Geophysics Agency (BMKG) said there was no tsunami potential detected because of the earthquake. It has also recorded several aftershocks. Meanwhile, the BMKG reported at 5:04 p.m. Jakarta time, there was a 5.2-magnitude earthquake with an epicenter at 61 kilometers southwestern off Biak Numfor regency in Papua.

Based on official information from the South Halmahera Disaster Mitigation Agency (BPBD), the quake was mostly felt in the regency for two to five seconds, prompting people to panic and rush out of their homes.

Yes, this 7.1 magnitude earthquake which hit Friday east of Bakersfield, Ca. near Ridgecrest, was predicted as part of my 14 day window after a full solar eclipse. In addition to the 7.1 quake which followed an earlier 6.4 quake, several aftershocks have been recorded. Seismologists in the area believe some 400 aftershocks are expected over the next several days.

The mag. 7.3 quake which hit NW of Saumlaki, Indonesia on June 24th also fits in the historical pattern of 14 days prior to an eclipse – and 14 days post event. Click Here for details. 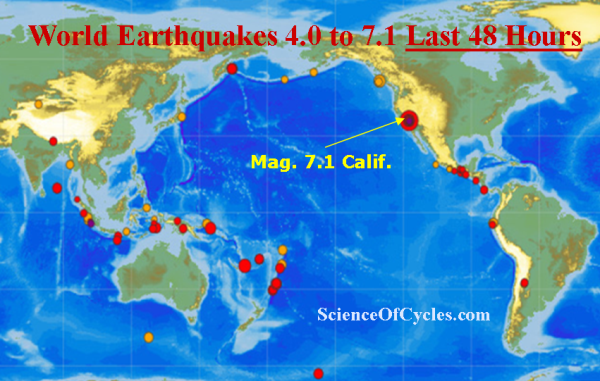 I wish I could say it’s over, but there are 10 more days to go – and since seismic events have been on the wane over the last several months, I expect more large events to continue.

See article published on July 4th so understand the research behind my 28 window surrounding a full solar eclipse. The unsettling title of the article is “Probability of Earth Changing Events Within 14 Day”.

Mount Soputan, located some 60 km from Manado, capital of the province, has high potential for further big eruption which is indicated by persistent tremors with amplitude of 41 mm, Spokesman of National Disaster Management Agency Sutopo Purwo Nugroho disclosed.

Several subdistricts in Minahasa Tenggara district were hit by rains of ash and volcanic materials that the local disaster agency distributes masks to protect local residents from the impact, he told Xinhua via phone.

The authorities have banned villagers or visitors from entering the area of 4 km from the crater, but at the southwest of the crater the evacuation zone is at 6. 5 km, Mr. Sutopo said.

The 1,874- meter high Mount Soputan is one of Indonesia’s active volcanoes whose number is about 129, according to the National Volcanology Agency.