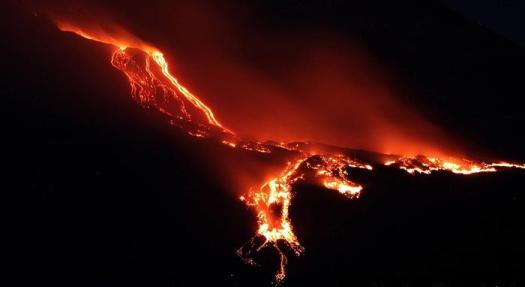 Plumes of ash prompted authorities on the island of Sicily to close the Fontanarossa and Comiso Airports in the city of Catania, local media reported.

La Repubblica newspaper said a Ryanair flight from Rome was diverted to Palermo on Friday night, while several flights were delayed from landing or taking off on Saturday.

Airport authorities said flights had returned to normal at 11 a.m. local time (0900 UTC), but stressed that there may still be disruptions and delays.

According to the INGV, the lava was spurting from one of the craters on the volcano’s desert-like southeastern face, and then traveling around 1.5 kilometers (1 mile) down a barren escarpment called the Valle del Bove (Ox Valley).

The most recent Etna activity follows an eruption in December as well as “lively spattering” recorded by the institute in June.