Japan has raised the warning level on a cluster of volcanos in the north of the country – just a week after an eruption at Kusatsu-Shirane caused an avalanche that killed a soldier and injured a dozen skiers at a winter resort. 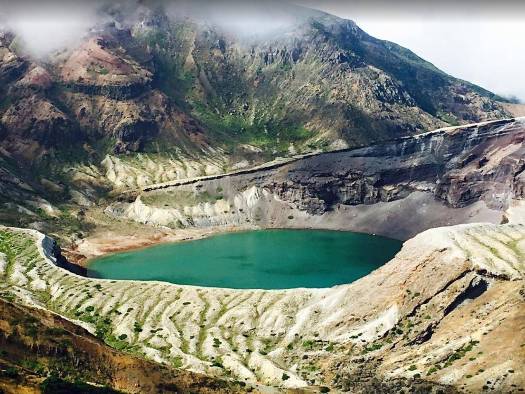 Japan’s Meteorological Agency raised the alert on the Zao range from two to one, meaning tourists should stay away from its crater.

“There is a possibility of a small-scale eruption,” the agency warned in a statement after detecting a number of small earth movements and a slight bulging of the ground in one region.

It also raised the possibility of volcanic rocks being tossed as far as 1.2km should the Zao peaks erupt. They stand at 1,841 metres (6,040 feet) at their highest point.

The Zao complex of stratovolcanoes straddle the Yamagata and Miyagi Prefectures in Honsu and are thought to be the island’s most active.

Last week’s sudden Kusatsu-Shirane eruption saw rock and lava rain down on skiers in central Japan at a ski run used as a training outpost by the country’s military.

Video footage taken by the skiers showed black ash boiling up into the sky as stones crashed down, some punching holes in the metal roof of a ski lift.

Eleven people were injured while around 100 sought refuge in a mountain hut for several hours before rescuers concluded it was safe for them to re-emerge.

Zao, like Kusatsu-Shirane, is a popular resort famed for its spectacular “snow monsters,” created by water vapour being blown from a nearby lake and freezing on trees in mid-winter. Its slopes are routinely busy with skiers in winter and hikers in spring, summer and autumn.

Japan has 110 active volcanoes and carefully monitors 47 of them around the clock.

Its worst volcanic disaster in recent memory came in September 2014, when 63 people were killed on Mount Ontake.