Glaciology experts have issued evidence that a large section of the Brunt Ice Shelf in Antarctica, which is home to the British Antarctic Survey’s Halley Research Station, is about break off. 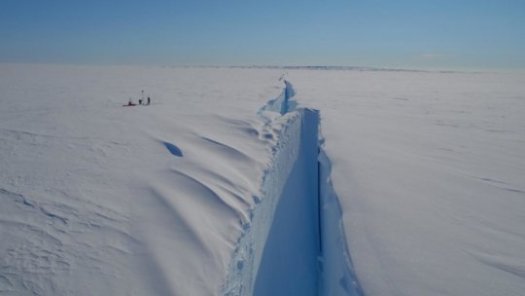 The rifting started several years ago and is now approaching its final phase. In anticipation of the iceberg breaking away, the research station, which is currently unmanned, has been relocated to a safer location on the ice shelf, meaning there is no danger posed to personnel.

The iceberg, measuring over 1,500 square kilometres — which is twice the size of New York City — is expected to break away from the Brunt Ice Shelf in as little as a few months, when two large cracks which have been growing over the past seven years meet.

Now academics from Northumbria University, in Newcastle upon Tyne, UK, in collaboration with scientists from ENVEO, a remote sensing company in Austria, have submitted new research to the journal The Cryosphere, which shows that the break-off is part of the ice shelf’s natural lifecycle, and that similar events may have occurred in the past.

As Professor Hilmar Gudmundsson of Northumbria explains: “I have been carrying out research in this area for more than 15 years and have been monitoring the growth of the cracks since they first emerged in 2012.

“Satellite images of the changes in the ice shelf have been shared online and there has been much speculation about the cause of this movement and the impact the iceberg will have when it breaks away.

“However, what many people do not realise is that this is a natural process and something which has happened time and again. We recognise that climate change is a serious problem which is having an impact around the world, and particularly in the Antarctic. However, there is no indication from our research that this particular event is related to climate change.

“We have been tracking the movement of the ice shelf for many years and our modelling indicates that this breakaway is entirely expected. That is why in 2014 we recommended that the Halley Research Station was moved to a new and safe location on the ice shelf.

“Our field observations and modelling has meant that the station was safely relocated with no danger to the scientists using it and minimal disruption to the research taking place.”

The Brunt Ice Shelf is a large floating area of ice, around 150m to 250m thick, and is made up of freshwater ice which originally fell as snow further inland. The ice shelf rests on top of the Weddell Sea and flows off the mainland, moving outwards from the centre of Antarctica.

As ice shelves are afloat, any icebergs that form as a result of fractures in the ice do not contribute to sea level rise. “Once the iceberg breaks away from the Brunt Ice Shelf it is likely to drift towards the west and slowly break up into smaller icebergs,” explains Dr Jan De Rydt, also of Northumbria University.

This isn’t the first time a large piece of ice shelf has broken away in Antarctica. The Pine Island Ice Shelf in West Antarctica has seen several large sections break off in recent years, and the Larsen C Ice Shelf to the West of the Brunt Ice Shelf has lost a section more than 3,600 square miles due to calving — when ice chunks break from the edge of a glacier — in 2017.

And there is historic evidence to show the Brunt Ice Shelf has seen similar large calving events in the past. As Professor Gudmundsson explains: “Maps drawn by Shackleton and Wordie during their expedition to the Brunt Ice Shelf in 1915 show that, at that time, the ice shelf was quite extended. However, by the time the Halley Research Station was established in the 1950s the reach of the ice shelf was much shorter, indicating that a large iceberg must have broken away at some point after 1915. This further backs up our research that this type of event is historically consistent and part of the natural cycle and movement of the ice shelf.”

The paper is co-authored by Thomas Nagler and Jan Wuite of ENVEO (Environmental Earth Observation), in Innsbruck, Austria, who have worked closely with Professor Gudmundsson and Dr De Rydt during the research. ENVEO is a world-leader in processing satellite data for monitoring changes in the global snow and ice cover. The two teams have been collaborating together for several years on a number of projects, with scientists from ENVEO using satellite imagery to extract data about the changing speed of the ice shelf, which is then shared with researchers at Northumbria University for modelling and interpretation.

Dr Jan Wuite of ENVEO said: “Thanks to the Copernicus Sentinel-1 and Sentinel-2 satellites we can now continuously monitor the movement of the ice shelf and the propagation of the cracks in great detail and in near real-time. These observational data are very useful for improving existing ice flow models.”

Dr Thomas Nagler of ENVEO added: “This work is the result of the long-lasting partnership between the glaciologists from Northumbria University and remote sensing experts from ENVEO, that has already led to several previous publications on Brunt Ice Shelf.”