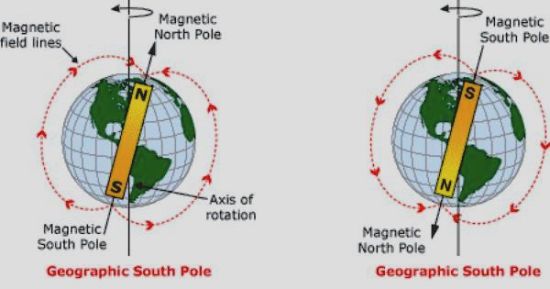 This is not the first time of such a rapid new discovery is published within days of an article I produced outlining my hypothesis and what is likely to come next.  Just two days ago I sent out my article titled New Study Reinforces Cyclical Magnetic Pole Reversals telling of the various descriptive patterns which have been shown to fit short and long term reversal cycles. 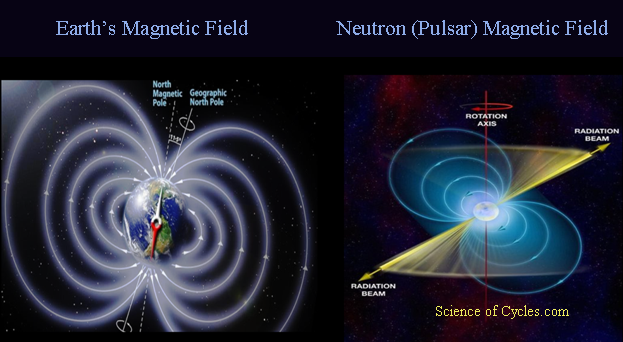 In an upcoming article later this week, I will describe signs and symptoms during the process of a full magnetic reversal which fits the pattern of historic cycles over what would be described as a ‘moderate’ time period, geologically speaking, covering a few hundred thousand years. There is also a longer term cycle which covers a few million years; however, there is also a short term cycle which occurs approximately every 40,000 years.

What I believe to be one of the most important questions, or should be, where in this current cycle are we today? My research covering the galaxy-sun-solar system connection which involves the discovery of various term cyclical events, suggests we are far along the process with just a few decades away from a significant excursion or full reversal.

I would suggest we are deep into the cycle, and perhaps far enough along to witness (and sense) magnetic north bouncing around the northern hemisphere above 60° latitude and swing down between 30° east and 30° west longitudes. Perhaps a most intriguing thought, is the idea that many of you are young enough to witness a phase of pronounced swings in both latitude and longitude within the next 50-60 years.

In today’s news, the discovery of two massive mantle plumes, residing on opposite sides of our planet. They sit next to or directly on the inner core approximately 1,800 miles (2,896 km) deep. This would be just the type of massive plume which could create a wobble as it goes through its natural process of convection.

Arizona State University scientists Edward Garnero, Allen McNamara and Sang-Heon (Dan) Shim, of the School of Earth and Space Exploration head up the team, and their work appears in the June issue of Nature Geoscience. “We believe our finding will help explain the plumbing that leads to some massive volcanic eruptions, as well as the mechanism of plate tectonics from the convection, or stirring, of the mantle. This is the geo-force that drives earthquakes. 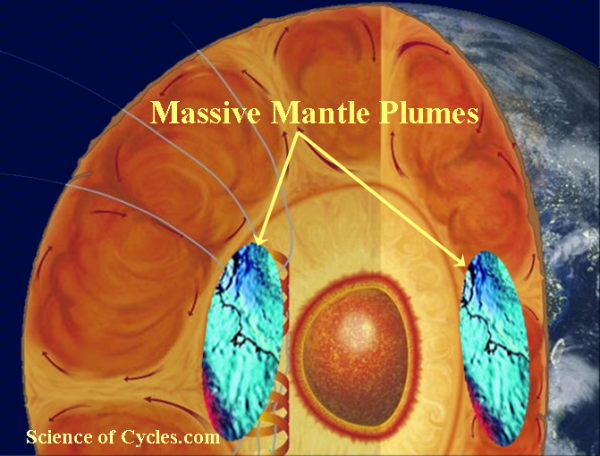 Earth is layered like an onion, with a thin outer crust, a thick viscous mantle, a fluid outer core and a solid inner core. The two plumes sit in the mantle on top of Earth’s core, under the Pacific Ocean on one side and beneath Africa and the Atlantic Ocean on the other.

Waves from earthquakes passing through Earth’s deep interior have revealed that these plumes are regions where seismic waves travel slowly. The mantle materials that surround these regions are thought to be composed of cooler rocks, associated with the downward movement of tectonic plates.

The plumes, also called thermo-chemical piles, have long been depicted as warmer-than-average mantle materials, pushed upward by a slow churning of hot mantle rock. The new paper argues they are also chemically different from the surrounding mantle rock, and may partly contain material pushed down by plate tectonics. They might even be material left over from Earth’s formation, 4.5 billion years ago.

Much is yet to be learned about these plumes. But the emerging view from seismic and geodynamic information is that they appear denser than the surrounding mantle materials, are dynamically stable and long-lived, and have been shaped by the mantle’s large-scale flow. The scientists expect that further work on the two deep-seated anomalies will help clarify the picture and tell of their origin.

“As the thermo-chemical piles come into sharper focus, we hope other Earth scientists will explore how these features fit into the big puzzle of planet Earth.”