Seismologists investigating how Earth forms new continental crust have compiled more than 20 years of seismic data from a wide swath of South America’s Andean Plateau and determined that processes there have produced far more continental rock than previously believed. 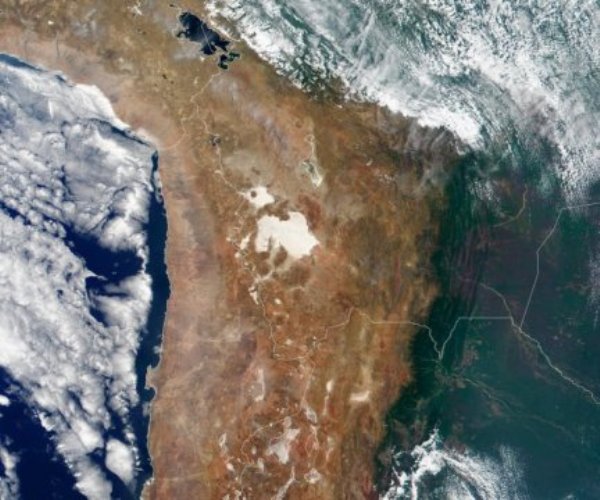 “When crust from an oceanic tectonic plate plunges beneath a continental tectonic plate, as it does beneath the Andean Plateau, it brings water with it and partially melts the mantle, the layer below Earth’s crust,” said Rice University’s Jonathan Delph, co-author of the new study published online this week in Scientific Reports. “The less dense melt rises, and one of two things happens: It either stalls in the crust to crystallize in formations called plutons or reaches the surface through volcanic eruptions.”

Delph, a Wiess Postdoctoral Research Associate in Rice’s Department of Earth, Environmental and Planetary Science, said the findings suggest that mountain-forming regions like the Andean Plateau, which geologists refer to as “orogenic plateaus,” could produce much larger volumes of continental rock in less time than previously believed.

Study lead author Kevin Ward, a postdoctoral researcher at the University of Utah, said, “When we compared the amount of trapped plutonic rock beneath the plateau with the amount of erupted volcanic rock at the surface, we found the ratio was almost 30:1. That means 30 times more melt gets stuck in the crust than is erupted, which is about six times higher than what’s generally believed to be the average. That’s a tremendous amount of new material that has been added to the crust over a relatively short time period.”

The Andean Plateau covers much of Bolivia and parts of Peru, Chile and Argentina. Its average height is more than 12,000 feet, and though it is smaller than Asia’s Tibetan Plateau, different geologic processes created the Andean Plateau. The mountain-building forces at work in the Andean plateau are believed to be similar to those that worked along the western coast of the U.S. some 50 million years ago, and Delph said it’s possible that similar forces were at work along the coastlines of continents throughout Earth’s history.

Most of the rocks that form Earth’s crust initially came from partial melts of the mantle. If the melt erupts quickly, it forms basalt, which makes up the crust beneath the oceans on Earth; but there are still questions about how continental crust, which is more buoyant than oceanic crust, is formed. Delph said he and Ward began their research in 2016 as they were completing their Ph.D.s at the University of Arizona. The pair spent several months combining public datasets from seismic experiments by several U.S. and German institutions. Seismic energy travels through different types of rock at different speeds, and by combining datasets that covered a 500-mile-wide swath of the Andean Plateau, Ward and Delph were able to resolve large plutonic volumes that had previously been seen only in pieces.

Over the past 11 million years, volcanoes have erupted thousands of cubic miles’ worth of material over much of the Andean Plateau. Ward and Delph calculated their plutonic-to-volcanic ratio by comparing the volume of regions where seismic waves travel extremely slowly beneath volcanically active regions, indicating some melt is present, with the volume of rock deposited on the surface by volcanoes.

“Orogenic oceanic-continental subduction zones have been common as long as modern plate tectonics have been active,” Delph said. “Our findings suggest that processes similar to those we observe in the Andes, along with the formation of supercontinents, could have been a significant contributor to the episodic formation of buoyant continental crust.”