Tropical Depression Jongdari re-strengthened into a tropical storm when it was southeast of Kyushu, Japan and NASA’s Aqua satellite saw it take on a comma shape. 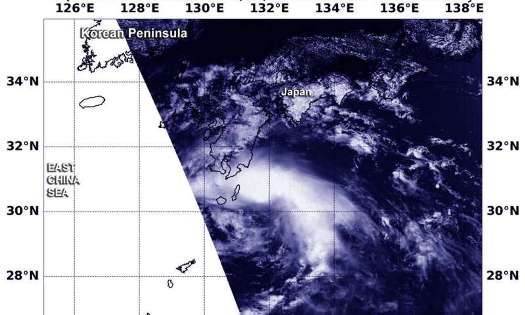 On July 31 at 0345 UTC (July 30 at 11:45 p.m. EDT), the Moderate Resolution Imaging Spectroradiometer or MODIS instrument that flies aboard NASA’s Aqua satellite provided a visible image of Tropical Storm Jongdari. The image revealed that the storm had taken on a signature comma shape which is associated with a more organized storm, although it is still elongated. The tropical storm has powerful storms around the center and a band extending to the northeast. That’s quite a difference from the very elongated appearance of the system the previous day, when wind shear was battering the system. The sea surface temperatures are warm enough to support intensification as they are as warm as or warmer than the 80 degrees Fahrenheit threshold (26.6 degrees Celsius).

The Joint Typhoon Warning Center or JTWC forecast takes Jongdari in a westerly direction toward China. The JTWC expects Jongdari to make landfall south of Shanghai on August 2.