Space may seem empty, but it’s actually a dynamic place populated with near-invisible matter, and dominated by forces, in particular those created by magnetic fields. Magnetospheres — the magnetic fields around most planets — exist throughout our solar system. They deflect high-energy, charged particles called cosmic rays that are spewed out by the Sun or come from interstellar space. Along with atmospheres, they happen to protect the planets’ surfaces from this harmful radiation. 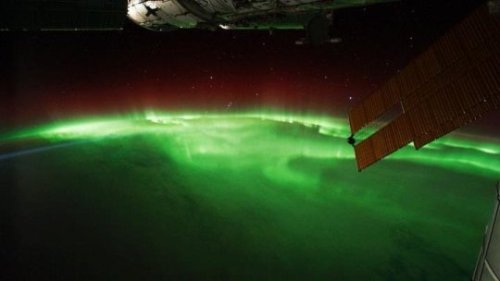 But not all magnetospheres are created equal: Venus and Mars do not have magnetospheres at all, while the other planets — and one moon — have ones that are surprisingly different.

NASA has launched a fleet of missions to study the planets in our solar system — many of which have sent back crucial information about magnetospheres. The twin Voyagers measured magnetic fields as they traveled out to the far reaches of the solar system, and discovered Uranus and Neptune’s magnetospheres. Other planetary missions including Galileo, Cassini and Juno, and a number of spacecraft that orbit Earth, provide observations to create a comprehensive understanding of how planets form magnetospheres, as well as how they continue to interact with the dynamic space environment around them.

Earth’s magnetosphere is created by the constantly moving molten metal inside Earth. This invisible “force field” around our planet has a general shape resembling an ice cream cone, with a rounded front and a long, trailing tail that faces away from the sun. The magnetosphere is shaped that way because of the near-constant flow of solar wind and magnetic field from the Sun-facing side.

Earth’s and other magnetospheres deflect charged particles away from the planet — but also trap energetic particles in radiation belts. Auroras are caused by particles that rain down into the atmosphere, usually not far from the magnetic poles.

It’s possible that Earth’s magnetosphere was essential for the development of conditions friendly to life, so learning about magnetospheres around other planets and moons is a big step toward determining if life could have evolved there.

Mercury, with a substantial iron-rich core, has a magnetic field that is only about 1 percent as strong as Earth’s. It is thought that the planet’s magnetosphere is compressed by the intense solar wind, limiting its extent. The MESSENGER satellite orbited Mercury from 2011 to 2015, helping us understand our tiny terrestrial neighbor.

After the Sun, Jupiter has by far the strongest and biggest magnetic field in our solar system — it stretches about 12 million miles from east to west, almost 15 times the width of the Sun. (Earth’s, on the other hand, could easily fit inside the Sun — except for its outstretched tail.) Jupiter does not have a molten metal core; instead, its magnetic field is created by a core of compressed liquid metallic hydrogen.

One of Jupiter’s moons, Io, has powerful volcanic activity that spews particles into Jupiter’s magnetosphere. These particles create intense radiation belts and auroras around Jupiter.

Ganymede, Jupiter’s largest moon, also has its own magnetic field and magnetosphere — making it the only moon with one. Its weak field, nestled in Jupiter’s enormous shell, scarcely ruffles the planet’s magnetic field.

Saturn’s huge ring system transforms the shape of its magnetosphere. That’s because oxygen and water molecules evaporating from the rings funnel particles into the space around the planet. Some of Saturn’s moons help trap these particles, pulling them out of Saturn’s magnetosphere, though those with active volcanic geysers — like Enceladus — spit out more material than they take in. NASA’s Cassini mission followed in the Voyagers’ wake, and studied Saturn’s magnetic field from orbit around the ringed planet between 2004 and 2017.

Neptune was also visited by Voyager 2, in 1989. Its magnetosphere is offset from its rotation axis, but only by 47 degrees. Similar to Uranus, Neptune’s magnetic field strength varies across the planet. This means that auroras can appear across the planet — not just close to the poles, like on Earth, Jupiter and Saturn.