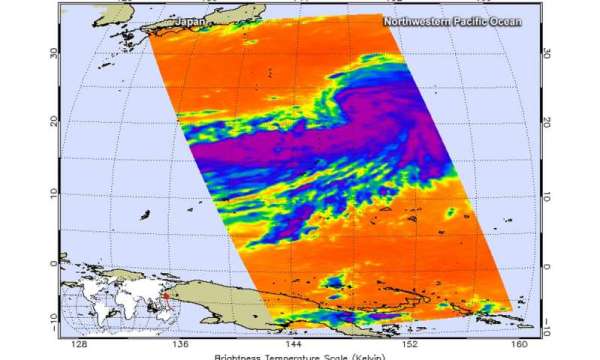 The Atmospheric Infrared or AIRS instrument aboard NASA’s Aqua satellite captured infrared data on Tropical Storm Sanvu Aug. 29 at 0335 UTC (Aug. 28 at 11:35 p.m. EDT). Infrared data provides temperature information to scientists. Cloud top temperatures are an important factor when it comes to determining the strength of storms. The higher the cloud tops, the colder and the stronger the storms.

The image showed that the area of coldest cloud tops had expanded since the previous day. Coldest temperatures were as cold as or colder than minus 63 degrees Fahrenheit (minus 53 degrees Celsius). Those storms were around the center of circulation and in a thick feeder band of thunderstorms extending southwest of the center. NASA research has shown that storms with cloud tops that cold, reached high into the troposphere and had the ability to generate heavy rain. The image did reveal that the tropical storm was being affected by southwesterly vertical wind shear as clouds are being pushed northeast of the center.

The Joint Typhoon Warning Center expects Sanvu to move in a northeasterly direction and intensify to typhoon status by Aug. 31, before weakening again.