Speeding through the atmosphere high above Jupiter’s equator is an east-west jet stream that reverses course on a schedule almost as predictable as a Tokyo train’s. Now, a NASA-led team has identified which type of wave forces this jet to change direction. 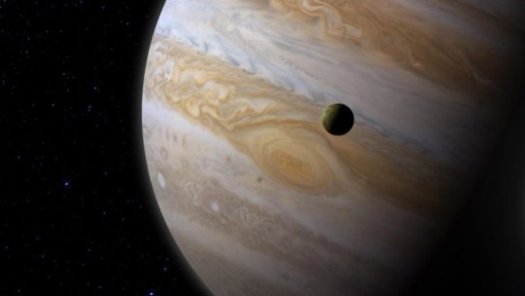 Similar equatorial jet streams have been identified on Saturn and on Earth, where a rare disruption of the usual wind pattern complicated weather forecasts in early 2016. The new study combines modeling of Jupiter’s atmosphere with detailed observations made over the course of five years from NASA’s Infrared Telescope Facility, or IRTF, in Hawai’i. The findings could help scientists better understand the dynamic atmosphere of Jupiter and other planets, including those beyond our solar system.

“Jupiter is much bigger than Earth, much farther from the Sun, rotates much faster, and has a very different composition, but it turns out to be an excellent laboratory for understanding this equatorial phenomenon,” said Rick Cosentino, a postdoctoral fellow at NASA’s Goddard Space Flight Center in Greenbelt, Maryland, and lead author of the paper published in the Journal of Geophysical Research-Planets.

Earth’s equatorial jet stream was discovered after observers saw debris from the 1883 eruption of the Krakatoa volcano being carried by a westward wind in the stratosphere, the region of the atmosphere where modern airplanes achieve cruising altitude. Later, weather balloons documented an eastward wind in the stratosphere. Scientists eventually determined that these winds reversed course regularly and that both cases were part of the same phenomenon.

The alternating pattern starts in the lower stratosphere and propagates down to the boundary with the troposphere, or lowest layer of the atmosphere. In its eastward phase, it’s associated with warmer temperatures. The westward phase is associated with cooler temperatures. The pattern is called Earth’s quasi-biennial oscillation, or QBO, and one cycle lasts about 28 months. The phase of the QBO seems to influence the transport of ozone, water vapor and pollution in the upper atmosphere as well as the production of hurricanes.

Jupiter’s cycle is called the quasi-quadrennial oscillation, or QQO, and it lasts about four Earth years. Saturn has its own version of the phenomenon, the quasi-periodic oscillation, with a duration of about 15 Earth years. Researchers have a general understanding of these patterns but are still working out how much various types of atmospheric waves contribute to driving the oscillations and how similar the phenomena are to each other.

Previous studies of Jupiter had identified the QQO by measuring temperatures in the stratosphere to infer wind speed and direction. The new set of measurements is the first to span one full cycle of the QQO and covers a much larger area of Jupiter. Observations extended over a large vertical range and spanned latitudes from about 40 degrees north to about 40 degrees south. The team achieved this by mounting a high-resolution instrument called TEXES, short for Texas Echelon Cross Echelle Spectrograph, on the IRTF.

“These measurements were able to probe thin vertical slices of Jupiter’s atmosphere,” said co-author Amy Simon, a Goddard scientist who specializes in planetary atmospheres. “Previous data sets had lower resolution, so the signals were essentially smeared out over a large section of the atmosphere.”

The team found that the equatorial jet extends quite high into Jupiter’s stratosphere. Because the measurements covered such a large region, the researchers could eliminate several kinds of atmospheric waves from being major contributors to the QQO, leaving gravity waves as the primary driver. Their model assumes gravity waves are produced by convection in the lower atmosphere and travel up into the stratosphere, where they force the QQO to change direction.

The results of simulations were an excellent match to the new set of observations, indicating that they correctly identified the mechanism. On Earth, gravity waves are considered most likely to be responsible for forcing the QBO to change direction, though they don’t appear to be strong enough to do the job alone.

“Through this study we gained a better understanding of the physical mechanisms coupling the lower and upper atmosphere in Jupiter, and thus a better understanding of the atmosphere as a whole,” said Raúl Morales-Juberías, the second author on the paper and an associate professor at the New Mexico Institute of Mining and Technology in Socorro. “Despite the many differences between Earth and Jupiter, the coupling mechanisms between the lower and upper atmospheres in both planets are similar and have similar effects. Our model could be applied to study the effects of these mechanisms in other planets of the solar system and in exoplanets.”