NASA’s OSIRIS-REx spacecraft will launch September 2016 and travel to a near-Earth asteroid known as Bennu to harvest a sample of surface material and return it to Earth for study. The science team will be looking for something special. Ideally, the sample will come from a region in which the building blocks of life may be found. 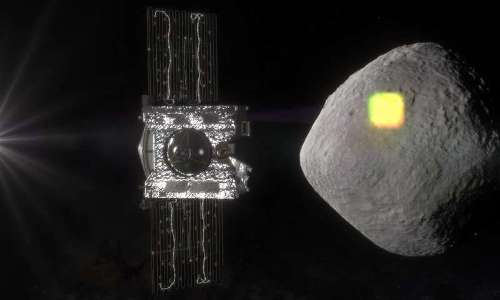 To identify these regions on Bennu, the Origins, Spectral Interpretation, Resource Identification, Security-Regolith Explorer (OSIRIS-REx) team equipped the spacecraft with an instrument that will measure the spectral signatures of Bennu’s mineralogical and molecular components.

Known as OVIRS (short for the OSIRIS-REx Visible and Infrared Spectrometer), the instrument will measure visible and near-infrared light reflected and emitted from the asteroid and split the light into its component wavelengths, much like a prism that splits sunlight into a rainbow.

“OVIRS is key to our search for organics on Bennu,” said Dante Lauretta, principal investigator for the OSIRIS-REx mission at the University of Arizona in Tucson. “In particular, we will rely on it to find the areas of Bennu rich in organic molecules to identify possible sample sites of high science value, as well as the asteroid’s general composition.”

OVIRS will work in tandem with another OSIRIS-REx instrument-the Thermal Emission Spectrometer, or OTES. While OVIRS maps the asteroid in the visible and near infrared, OTES picks up in the thermal infrared. This allows the science team to map the entire asteroid over a range of wavelengths that are most interesting to scientists searching for organics and water, and help them to select the best site for retrieving a sample.

In the visible and infrared spectrum, minerals and other materials have unique signatures like fingerprints. These fingerprints allow scientists to identify various organic materials, as well as carbonates, silicates and absorbed water, on the surface of the asteroid. The data returned by OVIRS and OTES will actually allow scientists to make a map of the relative abundance of various materials across Bennu’s surface.

“I can’t think of a spectral payload that has been quite this comprehensive before,” said Dennis Reuter, OVIRS instrument scientist at NASA’s Goddard Space Flight Center in Greenbelt, Maryland.

OVIRS will be active during key phases throughout the mission. As the OSIRIS-REx spacecraft approaches Bennu, OVIRS will view one entire hemisphere at a time to measure how the spectrum changes as the asteroid rotates, allowing scientists to compare ground-based observations to those from the spacecraft. Once at the asteroid, OVIRS will gather spectral data and create detailed maps of the surface and help in the selection of a sample site.

Using information gathered by OVIRS and OTES from the visible to the thermal infrared, the science team will also study the Yarkovsky Effect, or how Bennu’s orbit is affected by surface heating and cooling throughout its day. The asteroid is warmed by sunlight and re-emits thermal radiation in different directions as it rotates. This asymmetric thermal emission gives Bennu a small but steady push, thus changing its orbit over time. Understanding this effect will help scientists study Bennu’s orbital path, improve our understanding of the Yarkovsky effect, and improve our predictions of its influence on the orbits of other asteroids.

But despite its capabilities to perform complex science, OVIRS is surprisingly inexpensive and compact in its design. The entire spectrometer operates at 10 watts, requiring less power than a standard household light bulb.

“When you put it into that perspective, you can see just how efficient this instrument is, even though it is taking extremely complicated science measurements,” said Amy Simon, deputy instrument scientist for OVIRS at Goddard. “We’ve put a big job in a compact instrument.”
Unlike most spectrometers, OVIRS has no moving parts, reducing the risk of a malfunction.

“We designed OVIRS to be robust and capable of lasting a long time in space,” Reuter said. “Think of how many times you turn on your computer and something doesn’t work right or it just won’t start up. We can’t have that type of thing happen during the mission.”

Drastic temperature changes in space will put the instrument’s robust design to the test. OVIRS is a cryogenic instrument, meaning that it must be at very low temperatures to produce the best data. Generally, it doesn’t take much for something to stay cool in space. That is, until it comes in contact with direct sunlight.
Heat inside OVIRS would increase the amount of thermal radiation and scattered light, interfering with the infrared data. To avoid this risk, the scientists anodized the spectrometer’s interior coating. Anodizing increases a metal’s resistance to corrosion and wear. Anodized coatings can also help reduce scattered light, lowering the risk of compromising OVIRS’ observations. To find out more about the benefits of anodizing metals such as aluminium you could read this guide to anodizing plant.

The team also had to plan for another major threat: water. The scientists will search for traces of water when they scout the surface for a sample site. Because the team will be searching for tiny water levels on Bennu’s surface, any water inside OVIRS would skew the results. And while the scientists don’t have to worry about a torrential downpour in space, the OSIRIS-REx spacecraft may accumulate moisture while resting on its launch pad in Florida’s humid environment.

“There are always challenges that we don’t know about until we get there, but we try to plan for the ones that we know about ahead of time,” said Simon.
OVIRS will be essential for helping the team choose the best sample site. Its data and maps will give the scientists a picture of what is present on Bennu’s surface.