Now that scientists can detect the wiggly distortions in space-time created by the merger of massive black holes, they are setting their sights on the dynamics and aftermath of other cosmic duos that unify in catastrophic collisions. 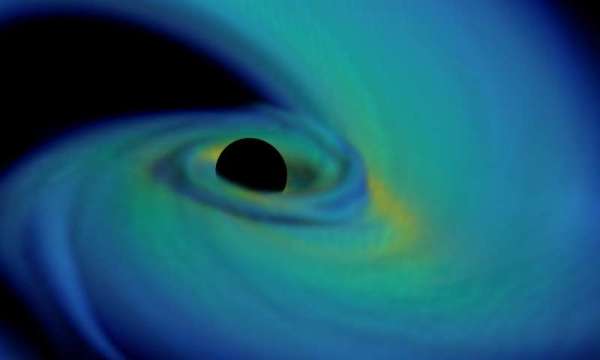 Working with an international team, scientists at the Department of Energy’s Lawrence Berkeley National Laboratory (Berkeley Lab) have developed new computer models to explore what happens when a black hole joins with a neutron star – the superdense remnant of an exploded star.

The simulations, carried out in part at Berkeley Lab’s National Energy Research Scientific Computing Center (NERSC), are intended to help detectors home in on the gravitational-wave signals. Telescopes, too, can search for the brilliant bursts of gamma-rays and the glow of the radioactive matter that these exotic events can spew into surrounding space.

In separate papers published in a special edition of the scientific journal Classical and Quantum Gravity, Berkeley Lab and other researchers present the results of detailed simulations.

One of the studies models the first milliseconds (thousandths of a second) in the merger of a black hole and neutron star, and the other details separate simulations that model the formation of a disk of material formed within seconds of the merger, and of the evolution of matter that is ejected in the merger.

That ejected matter likely includes gold and platinum and a range of radioactive elements that are heavier than iron.

Any new information scientists can gather about how neutron stars rip apart in these mergers can help to unlock their secrets, as their inner structure and their likely role in seeding the universe with heavy elements are still shrouded in mystery.

“We are steadily adding more realistic physics to the simulations,” said – Foucart, who served as a lead author for one of the studies as a postdoctoral researcher in Berkeley Lab’s Nuclear Science Division.

“But we still don’t know what’s happening inside neutron stars. The complicated physics that we need to model make the simulations very computationally intensive.”

Foucart, who will soon be an assistant professor at the University of New Hampshire, added, “We are trying to move more toward actually making models of the gravitational-wave signals produced by these mergers,” which create a rippling in space-time that researchers hope can be detected with improvements in the sensitivity of experiments including Advanced LIGO, the Laser Interferometer Gravitational-Wave Observatory.

In February 2016, LIGO scientists confirmed the first detection of a gravitational wave, believed to be generated by the merger of two black holes, each with masses about 30 times larger than the Sun.

The signals of a neutron star merging with black holes or another neutron star are expected to generate gravitational waves that are slightly weaker but similar to those of black hole-black hole mergers, Foucart said.
Radioactive ‘waste’ in space

Daniel Kasen, a scientist in the Nuclear Science Division at Berkeley Lab and associate professor of physics and astronomy at UC Berkeley who participated in the research, said that inside neutron stars “there may be exotic states of matter unlike anything realized anywhere else in the universe.”

In some computer simulations the neutron stars were swallowed whole by the black hole, while in others there was a fraction of matter coughed up into space. This ejected matter is estimated to range up to about one-tenth of the mass of the Sun.

While much of the matter gets sucked into the larger black hole that forms from the merger, “the material that gets flung out eventually turns into a kind of radioactive ‘waste,'” he said. “You can see the radioactive glow of that material for a period of days or weeks, from more than a hundred million light years away.” Scientists refer to this observable radioactive glow as a “kilonova.”

The simulations use different sets of calculations to help scientists visualize how matter escapes from these mergers. By modeling the speed, trajectory, amount and type of matter, and even the color of the light it gives off, astrophysicists can learn how to track down actual events.

The weird world of neutron stars

The size range of neutron stars is set by the ultimate limit on how densely matter can be compacted, and neutron stars are among the most superdense objects we know about in the universe.

Neutron stars have been observed to have masses up to at least two times that of our sun but measure only about 12 miles in diameter, on average, while our own sun has a diameter of about 865,000 miles. At large enough masses, perhaps about three times the mass of the sun, scientists expect that neutron stars must collapse to form black holes.

A cubic inch of matter from a neutron star is estimated to weigh up to 10 billion tons. As their name suggests, neutron stars are thought to be composed largely of the neutrally charged subatomic particles called neutrons, and some models expect them to contain long strands of matter – known as “nuclear pasta” – formed by atomic nuclei that bind together.

Neutron stars are also expected to be almost perfectly spherical, with a rigid and incredibly smooth crust and an ultrapowerful magnetic field. They can spin at a rate of about 43,000 revolutions per minute (RPMs), or about five times faster than a NASCAR race car engine’s RPMs.

The aftermath of neutron star mergers

The researchers’ simulations showed that the radioactive matter that first escapes the black hole mergers may be traveling at speeds of about 20,000 to 60,000 miles per second, or up to about one-third the speed of light, as it is swung away in a long “tidal tail.”

“This would be strange material that is loaded with neutrons,” Kasen said. “As that expanding material cools and decompresses, the particles may be able to combine to build up into the heaviest elements.” This latest research shows how scientists might find these bright bundles of heavy elements.

“If we can follow up LIGO detections with telescopes and catch a radioactive glow, we may finally witness the birthplace of the heaviest elements in the universe,” he said. “That would answer one of the longest-standing questions in astrophysics.”

Most of the matter in a black hole-neutron star merger is expected to be sucked up by the black hole within a millisecond of the merger, and other matter that is not flung away in the merger is likely to form an extremely dense, thin, donut-shaped halo of matter.

Over timescales ranging from tens of milliseconds to several seconds, the hot disk spreads out and launches more matter into space. “A number of physical processes – from magnetic fields to particle interactions and nuclear reactions – combine in complex ways to drive the evolution of the disk,” said Rodrigo Fernández, an assistant professor of physics at the University of Alberta in Canada who led one of the studies.

Simulations carried out on NERSC’s Edison supercomputer were crucial in understanding how the disk ejects matter and in providing clues for how to observe this matter, said Fernández, a former UC Berkeley postdoctoral researcher.

Eventually, it may be possible for astronomers scanning the night sky to find the “needle in a haystack” of radioactive kilonovae from neutron star mergers that had been missed in the LIGO data, Kasen said.

“With improved models, we are better able to tell the observers exactly which flashes of light are the signals they are looking for,” he said. Kasen is also working to build increasingly sophisticated models of neutron star mergers and supernovae through his involvement in the DOE Exascale Computing Project.

As the sensitivity of gravitational-wave detectors improves, Foucart said, it may be possible to detect a continuous signal produced by even a tiny bump on the surface of a neutron star, for example, or signals from theorized one-dimensional objects known as cosmic strings.

“This could also allow us to observe events that we have not even imagined,” he said.