New findings reveal deposits on Mars that could be interpreted to be ice-rich may contain little or no ice at all, based on an analysis of radar sounder data for Meridiani Planum—an area on the planet’s equator being explored by the Opportunity rover. 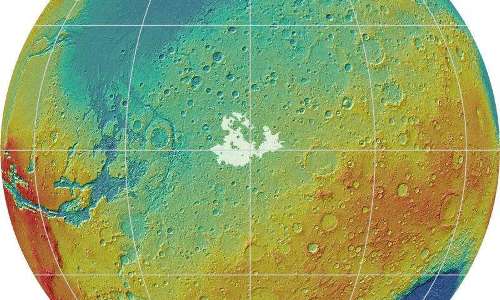 This new insight into Meridiani Planum may help identify areas with and without accessible water ice, a resource critical to future human exploration and possible colonization of Mars. A new paper detailing the findings is published in Geophysical Research Letters, a journal of the American Geophysical Union.

In the new study, researchers present new compaction models for materials on Mars that suggest the electrical properties of the deposits of Meridiani Planum, derived from data collected by the Mars Advanced Radar for Subsurface and Ionospheric Sounding (MARSIS) instrument, can be explained without the need for pore-filling ice.

The MARSIS instrument transmits low-frequency radio pulses that penetrate certain geologic materials and are reflected back where the radio pulses encounter a change in bulk density or composition of the materials. The detection of subsurface reflectors can be used to determine the dielectric constant, a key electrical properties of the materials, by measuring the travel time delays between radar pulses reflected by the surface and subsurface interfaces in Meridiani Planum.

However, newly derived compaction models for Mars indicate that the derived, relatively low dielectric constant of the Meridiani Planum deposits are consistent with a thick sequence of ice-free, porous, windblown sand. Unlike other geologic materials that have been suggested for Meridiani Planum such as volcanic ash or silicate dust, a thick deposit of sand-sized particles on Mars does not compact nearly as much.

“It’s very revealing that the low dielectric constant of the Meridiani Planum deposits can be explained without invoking pore-filling ice,” said Thomas R. Watters, a planetary scientist in the Center for Earth and Planetary Studies at the National Air and Space Museum in Washington, D.C. and lead author of the new study. “Our results suggest that caution should be exercised in attributing non-polar deposits on Mars with low dielectric constants to the presence of water ice.”