Officials in western New York declared a state of emergency after three tornadoes left damage Thursday as part of a round of severe thunderstorms that rumbled across parts of the Northeast and Midwest. 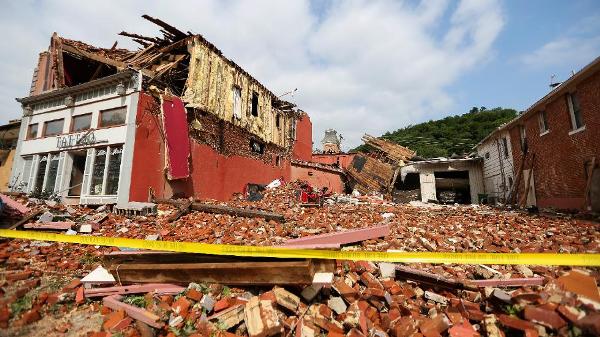 The first twister received a rating of EF2 and the second, which followed within 20 minutes, was classified as an EF1, according to the National Weather Service. A third tornado, also rated EF1, was confirmed in the town of Angelica.

Damage was reported at the Erie County Fairgrounds and the Hamburg Gaming casino in Hamburg, New York, after the storm, NewYorkUpstate.com reports.

“We’ve got hundreds of trees that are downed,” said Orchard Park Police Chief Mark Pacholec told the Buffalo News. “We have a couple of houses with no roofs. We have power poles down. Power lines down.”

In Buffalo, the city court was closed Thursday due to damage from flooding brought on by heavy rains, 7 Eyewitness News reported.

Erie County Executive Mark Poloncarz announced via Twitter that a no unnecessary travel advisory has been issued due to road blockages and downed power lines.

As many as 13,000 homes and businesses were without power after the tornadoes struck, according to the Associated Press. Hamburg is a town of about 57,000 located about 10 miles south of Buffalo.