The first tornado warning in central Alabama went out around 1 p.m. Sunday. In the hours that followed, a cluster of storms ripped through the Southeast, spawning multiple tornadoes, killing at least 23 and leaving a trail of rubble. 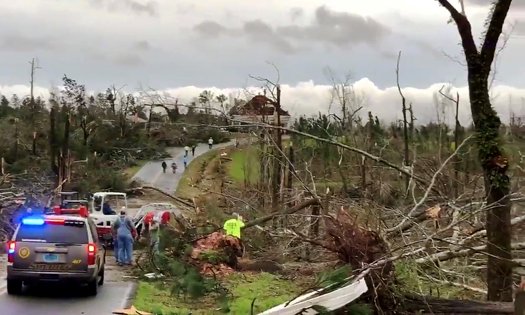 As the storms pushed east, the tornadoes would leave a path of destruction that stretched from Alabama into Florida and Georgia. The reported deaths were all in Lee County, Ala., where two tornadoes — one at least a half-mile wide — wrecked homes and uprooted trees. It was unclear Sunday night whether the deaths had occurred in various locations or all in one place. Dozens of people were sent to hospitals.

As darkness came, rescue workers searched for survivors, and more victims, often with little more than a flashlight or the lights of their vehicles to aid them. More than 150 people were part of the search-and-rescue operations near the Lee County communities of Smiths Station and Beauregard, which is about 60 miles east of Montgomery, said Rita Smith, a spokeswoman for the county’s emergency management agency.

Sheriff Jay Jones of Lee County told reporters that 23 people had been killed. The East Alabama Medical Center in Opelika, Ala., had received more than 60 patients as of Sunday night, said John Atkinson, a spokesman for the center. He said the conditions of the patients varied. 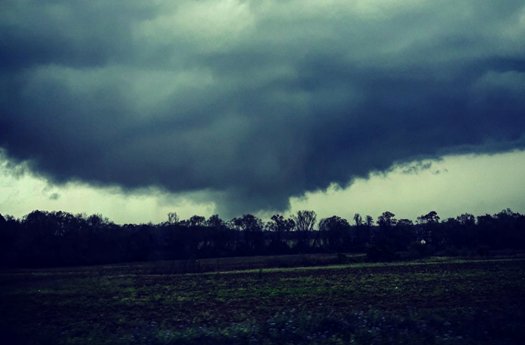 In Georgia, Booker T. Gainor, the mayor of Cairo, told The Tallahassee Democrat that a tornado had hit just south of downtown, damaging dozens of homes and businesses.

“We have a lot of trees down, debris and power lines,” he told The Democrat. “We have trees completely through houses. You would think a hurricane came after this, the way it looks.”

President Trump said in a tweet on Sunday night that people in and around Alabama should “be careful and safe.”

“Tornadoes and storms were truly violent and more could be coming,” he said. “To the families and friends of the victims, and to the injured, God bless you all!” 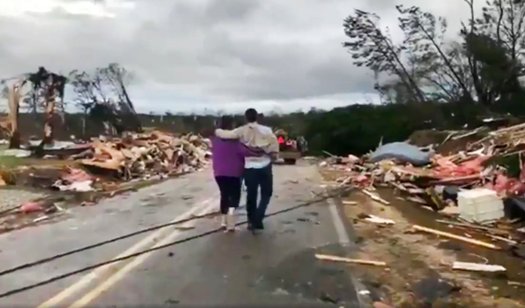 Alex Miller, 27, was driving with two passengers from Savannah, Ga., to his home in Birmingham, Ala., on Sunday evening when they were alerted on their cellphones that tornadoes might be incoming. They stopped at a gas station in Columbus, Ga., to let one wave of the storm pass, and continued to head north, hoping to break through the worst of the weather during the lull.

As they neared Smiths Station, Ala., they passed a gas station with a billboard toppled over. They then passed a police blockade diverting southbound traffic off the main roads. The skies darkened, the rain grew stronger — “all the ominous signs,” Mr. Miller said.

“The plan quickly pivoted from ‘We need to drive north’ to ‘We need to pull over and seek shelter immediately,’” he said.

Mr. Miller pulled into a gas station in Smiths Station and sheltered in a hallway in the back with about 10 other people, including children, and a dog. The power was out inside and the light outside continued to dim. It was “post-sunset dark,” Mr. Miller said. The wind whipped outside, in what appeared to be one of the tornadoes to hit the Lee County area.

“The energy was pretty tense,” he said.

After the worst weather abated, Mr. Miller said, he got into the car and drove north, past debris strewn around the roads. Within 15 minutes, he saw sunshine.

David McBride, the owner of Buck Wild Saloon in Smiths Station, told The Ledger-Enquirer that he had ridden out the tornado inside his truck as it was pelted with debris, watching as the winds tore his saloon apart.

“We can replace all this, can get a new truck, we can get a building down the road,” he said. “Thank you, Jesus, I’m still here.”

Chief Byron Prather of the Opelika Fire Department told the television station WSFA 12 that several mobile homes and houses had been destroyed in Lee County.

“There’s debris laying everywhere,” he said. “There was a mobile home frame in the middle of the road at one time. There’s personal belongings in the trees. There’s insulation, there’s building material in the trees.”

Meredith Wyatt, a meteorologist with the National Weather Service in Birmingham, Ala., said the office had issued its first of at least six tornado warnings of the day for Lowndes and Montgomery Counties. The warnings were based on winds, radar patterns of flying debris, and live feeds from storm chasers on the ground.

“And it went full swing after that,” she said.

Between three and five tornadoes probably touched down in central southeastern Alabama, she said. The Weather Service confirmed that a tornado at least a half-mile wide with 136 to 165 m.p.h. winds — or an EF-3 tornado on the Enhanced Fujita scale — had touched down in the southern part of Lee County.

The service will send teams on Monday to survey the damage to determine the path of the tornadoes, their intensity and how long they stayed on the ground.

Nearly eight years after a tornado outbreak that devastated major cities and small towns alike, Alabama remains wary of severe weather and the menace of tornadoes.

After the 2011 outbreak, which spawned more than 60 tornadoes in Alabama and led to more than 230 fatalities in the state, some communities ordered upgrades to storm shelters, and residents became extraordinarily sensitive about even the threat of poor weather.

Sunday’s weather was a “fairly classic” pattern for March, where colder air mixes with warmer air, said James Spann, the chief meteorologist for WBMA television, the local ABC affiliate. Tornadoes are common this time of year in “Dixie alley,” the nickname given to the Southern states vulnerable to severe weather, he said.

“This is clearly the biggest loss of life we’ve had in my state in a while,” he said. “In fact, we had more deaths in Lee County, Ala., today than the entire United States last year.”

In 2018, 10 people were killed by tornadoes in the United States.