The Pacific Ring of Fire has been peppered with earthquakes over the past 24 hours with the region surrounding Australia particularly active. 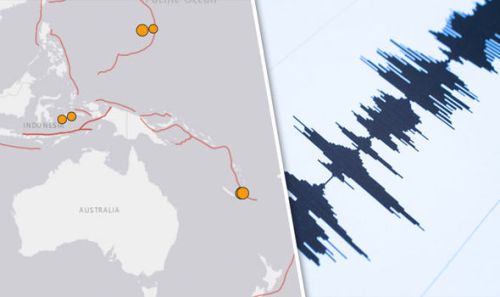 A swarm of seven earthquakes measuring between 4.5 and 5.1 on the Richter Scale struck a small area in the Coral Sea near New Caledonia.

Two measuring 4.7 and 4.9 hit Indonesia, to the north of Australia, with another measuring 4.4 struck Fiji.

Across other parts of the Pacific Rim, three earthquakes hit near Guam, one struck Japan and two were recorded in Alaska.

One earthquake was also struck on the west coast of America, one in Mexico and a final in Argentina – all over the past day.

It increases fears ‘the Big One’ could be about to strike the Pacific Ring of Fire – although, as with all geological events, it is impossible to predict exactly when or where this will occur.

However, geologists claim new research which they say show it is now possible to get a “five-years heads-up” on future earthquakes.

Roger Bilham of the University of Colorado said: “The Earth offers us a 5-years heads up on future earthquakes, which is remarkable.

“Calculations show the asthenosphere to have an appropriate viscosity to account for the delay between deceleration and subduction zone seismicity.

“However, a geodetic test of the anticipated westward overshoot would be of utility.

“Whatever the mechanism, the 5-6 year advanced warning of increased seismic hazards afforded by the first derivative of the LoD is fortuitous, and has utility in disaster planning.

“The year 2017 marks six years following a deceleration episode that commenced in 2011.

“This suggests the world has now entered a period of enhanced global seismic productivity with a duration of at least five years.”