Nearly 10 billion years ago in a galaxy known as PKS B1424-418, a dramatic explosion occurred. Light from this blast began arriving at Earth in 2012. Now, an international team of astronomers, led by Prof. Matthias Kadler, professor for astrophysics at the university of Würzburg, and including other scientists from the new research cluster for astronomy and astroparticle physics at the universities of Würzburg and Erlangen-Nürnberg, have shown that a record-breaking neutrino seen around the same time likely was born in the same event. The results are published in Nature Physics.

Neutrinos are the fastest, lightest, most unsociable and least understood fundamental particles, and scientists are just now capable of detecting high-energy ones arriving from deep space. The present work provides the first plausible association between a single extragalactic object and one of these cosmic neutrinos. 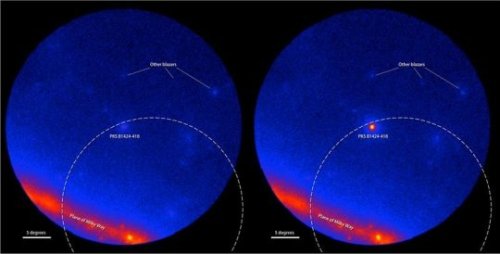 Although neutrinos far outnumber all the atoms in the universe, they rarely interact with matter, which makes detecting them quite a challenge. But this same property lets neutrinos make a fast exit from places where light cannot easily escape such as the core of a collapsing star and zip across the universe almost completely unimpeded. Neutrinos can provide information about processes and environments that simply aren’t available through a study of light alone.

Recently, the IceCube Neutrino Observatory at the South Pole found first evidence for a flux of extraterrestrial neutrinos, which was named the Physics World breakthrough of the year 2013. To date, the science team of IceCube Neutrino has announced about a hundred very high-energy neutrinos and nicknamed the most extreme events after characters on the children’s TV series “Sesame Street.” On Dec. 4, 2012, IceCube detected an event known as Big Bird, a neutrino with an energy exceeding 2 quadrillion electron volts (PeV). To put that in perspective, it’s more than a million million times greater than the energy of a dental X-ray packed into a single particle thought to possess less than a millionth the mass of an electron. Big Bird was the highest-energy neutrino ever detected at the time and still ranks second.

Where did it come from? The best IceCube position only narrowed the source to a patch of the southern sky about 32 degrees across, equivalent to the apparent size of 64 full moons. “It’s like a crime scene investigation,” says lead author Matthias Kadler, a professor of astrophysics at the University of Würzburg in Germany, “The case involves an explosion, a suspect, and various pieces of circumstantial evidence.”

Starting in the summer of 2012, NASA’s Fermi satellite witnessed a dramatic brightening of PKS B1424-418, an active galaxy classified as a gamma-ray blazar. An active galaxy is an otherwise typical galaxy with a compact and unusually bright core. The excess luminosity of the central region is produced by matter falling toward a supermassive black hole weighing millions of times the mass of our sun. As it approaches the black hole, some of the material becomes channeled into particle jets moving outward in opposite directions at nearly the speed of light. In blazars one of these jets happens to point almost directly toward Earth.

“Within their jets, blazars are capable of accelerating protons to relativistic energies. Interactions of these protons with light in the central regions of the blazar can create pions. When these pions decay, both gamma rays and neutrinos are produced,” explains Karl Mannheim, a coauthor of the study and astronomy professor in Würzburg, Germany. “We combed through the field where Big Bird must have originated looking for astrophysical objects capable of producing high-energy particles and light,” adds coauthor Felicia Krauß, a doctoral student at the University of Erlangen-Nürnberg in Germany. “There was a moment of wonder and awe when we realized that the most dramatic outburst we had ever seen in a blazar happened in just the right place at just the right time.”

In a paper published Monday, April 18, in Nature Physics, the team suggests the PKS B1424-418 outburst and Big Bird are linked, calculating only a 5-percent probability the two events occurred by chance alone. Using data from Fermi, NASA’s Swift and WISE satellites, the LBA and other facilities, the researchers determined how the energy of the eruption was distributed across the electromagnetic spectrum and showed that it was sufficiently powerful to produce a neutrino at PeV energies.

“Taking into account all of the observations, the blazar seems to have had means, motive and opportunity to fire off the Big Bird neutrino, which makes it our prime suspect,” explains Matthias Kadler.

Francis Halzen, the principal investigator of IceCube at the University of Wisconsin-Madison, and not involved in this study, thinks the result is an exciting hint of things to come. “IceCube is about to send out real-time alerts when it records a neutrino that can be localized to an area a little more than half a degree across, or slightly larger than the apparent size of a full moon,” he concludes. “We’re slowly opening a neutrino window onto the cosmos.”

But this study also demonstrates the vital importance of classical astronomical observations in an era when new detection methods like neutrino observatories and gravitational-wave detectors open new but unknown skies.