A powerful storm was forecast to slam the Northeast overnight into Monday, threatening to bring heavy rains, flooding and damaging winds to the region on the fifth anniversary of the devastating Hurricane Sandy. 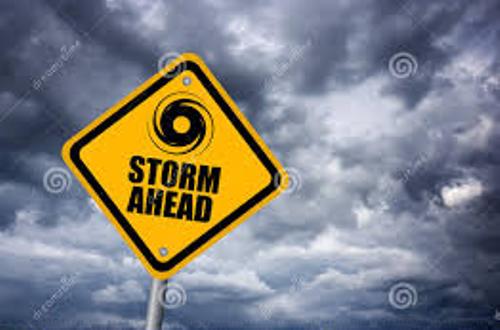 Heavy rain covered the region late Sunday, and the storm was expected to bring as much as 5 inches of rain to some areas through Monday, the National Weather Service said.

Heavy rains and potentially damaging winds could continue over parts of New England and Upstate New York into Monday.

“We have high wind warnings and high wind advisories that are up throughout the Northeast,” said Heather Tesch, a meteorologist for The Weather Channel. “Expect a lot of delays at the major airports.”

The National Weather Service issued a flood warning for much of southeastern New York, including Manhattan, on Sunday night. A flash flood watch was in effect through late Sunday night for all of Connecticut, Massachusetts and Rhode Island.

“Widespread rainfall totals of 3 to 5 inches are expected, but locally higher amounts, perhaps 6 inches or more, are possible,” the NWS said.

And the storm was expected to bring “hurricane force wind gusts” to coastal waters from eastern Massachusetts to southern Maine early Monday, according to the National Weather Service. A hurricane-force wind warning means winds of 64 knots or greater are imminent or already happening, according to the NWS.

“All vessels should remain in port … or take shelter as soon as possible …. until winds and waves subside,” the weather service said.

Experts are recommending recreational boaters to keep their boats at the seaport and avoid sailing in the waters while the storm watch is in effect. The National Weather Service also advised people to prepare for strong winds and take shelter.

Power outages and tree damage were possible across the Northeast as well, likely along the coast, according to the Weather Channel. Winds were expected to trigger delays at major airports in the region.

The storm comes five years after Sandy made landfall in New Jersey, beginning its devastation to the area. Sandy led to the death of 182 individuals and more than $71 billion in damage in the United States. The hurricane knocked out power in millions of homes, the Associated Press reported.

John Rowe, senior meteorologist at the Weather Channel, expects the storm to merge with Tropical Storm Philippe on the East Coast. “The whole system is going to intensify [Sunday night] and it’ll bring heavy rains from Eastern Pennsylvania and heavy rain and wind,” he said. Philippe is forming around the Bahamas and veering away from Florida, according to the Weather Channel.