Researchers say they’ve found evidence of the 1755 Cape Ann earthquake, the largest to hit New England in recorded history, in an unlikely place — the bottom of a muddy pond in Lynn. 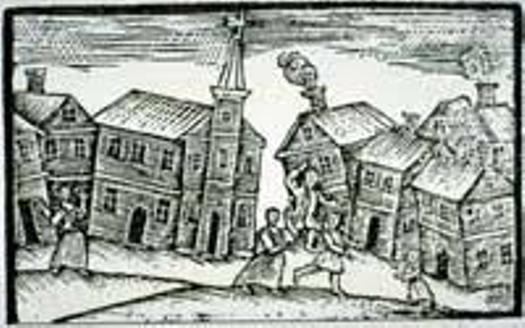 Researchers decided to look for evidence in New England lakes that were near the earthquake’s epicenter. They settled on 44-acre Sluice Pond, said Katrin Monecke, the lead author of the study and a geosciences professor at Wellesley College.

“We concentrated on lake sediments for one reason — lakes form a very good geologic archive because every year you deposit one layer of sediment and so you get very good, undisturbed records, especially if you find deep lakes,” she said.

The team extracted two sediment cores from the depths of the pond to search for signs of the earthquake that shook New England more than 250 years ago.

“When you have ground-shaking, these slopes in the lake basin become unstable and sediment from the shore slides into the deep basin,” Monecke said. “We were able to find a layer of such sediment in Sluice Pond that we can date back to basically 1755.”

The team’s research was published in the journal Seismological Research Letters.

The earthquake, which had a magnitude of 6 to 6.25, had a huge effect on Boston, said John Ebel, one of the authors of the study and a seismologist at Boston College’s Weston Observatory. Brittle structures and unreinforced brick walls came crashing down. About a third of the chimneys in Boston were damaged and needed to be repaired or replaced, he said.

Faneuil Hall’s iconic grasshopper steeple came toppling down during the quake and had to be repaired, Ebel said.

“They say the streets in Boston were covered with so many bricks that you couldn’t drive a horse and carriage through them afterward,” he said.

The pond contains up to 20 feet of sediment deposited there since the retreat of glaciers from New England.

The sediments the researchers looked at were mostly homogeneous, with a rich, dark brown color, she said. But some parts were a lighter brown. After running several tests — including analyzing grain size, studying plant debris, and quantifying organic carbon content — the team was able to clearly identify differences in the sediments before and after the earthquake, Monecke said.

“It clearly shows the period where the steep sides from the lake were washed into the deep basin,” she said.

Looking at lake sediments could provide a crucial window into the distant past, researchers believe.

“Strong earthquakes in New England leave a record in the organic-rich sediments of small ponds. Such lakes are abundant in this formerly glaciated terrain and can be used to establish paleoseismic records for a region where the recurrence interval of large, potentially damaging earthquakes is mostly unknown,” the study said.

Ebel said, “We now have evidence of lake sediments in the 1755 earthquake and . . . if we can go backward in time, we can see how often strong earthquakes have occurred in the area. Right now we’ve only got one earthquake, so we’re learning how to look for patterns. It’s an assessment of probability.”

This information will be used in national seismic hazard maps, which chart the probability and intensity of earthquakes in a certain area, Monecke said. If seismologists know what type of ground-shaking has occurred in the past, they can show the likelihood of a similar quake in the future.

Basically, Monecke said, with the help of pond mud, people could someday have a better idea of what kind of earthquake danger they’re in.

“These maps also inform building designs,” she said. “It’s information that can help a community prepare for a hazard.”