A research team led by astronomers at the University of Warwick had to wait over 100 days for the sight of the first of confirmed neutron star merger to remerge from behind the glare of the Sun. 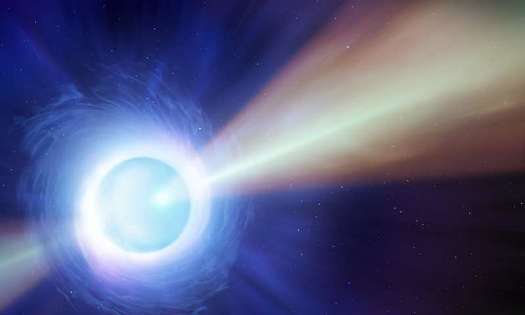 They were rewarded with the first confirmed visual sighting of a jet of material that was still streaming out from merged star exactly 110 days after that initial cataclysmic merger event was first observed. Their observations confirm a key prediction about the aftermath of neutron star mergers.

The binary neutron star merger GW170817 occurred 130 million light years away in a galaxy named NGC 4993. It was detected in August 2017 by the Advanced Laser Interferometer Gravitational-Wave Observatory (Adv-LIGO), and by Gamma Ray Burst (GRB) observations, and then became the first ever neutron star merger to be observed and confirmed by visual astronomy.

After a few weeks the merged star then passed behind the glare of our sun leaving it effectively hidden from astronomers until it remerged from that glare 100 days after the merger event. It was at that point that the University of Warwick research team were able to use the Hubble Space Telescope to see the star was still generating a powerful beam of light in a direction that, while off centre to the Earth, was starting to spread out in our direction.

Their research has just been published in a paper entitled: “The optical afterglow of the short gamma-ray burst associated with GW170817” in Nature Astronomy’s website at 4pm UK time on Monday 02 July 2018.

The lead author of the paper, Dr. Joe Lyman from the University of Warwick’s Department of Physics, said:

“Early on, we saw visible light powered by radioactive decay of heavy elements, over a hundred days later and this has gone, but now we see a jet of material, ejected at an angle to us, but at almost of the speed of light. This is quite different than some people have suggested, that the material wouldn’t come out in a jet, but in all directions.”

Professor Andrew Levan from the University of Warwick’s Department of Physics, another of the papers leading authors added:

“If we’d looked straight down this beam we’d have seen a really powerful burst of gamma-ray. This means that it is quite likely that every neutron star that mergers actually creates a gamma-ray burst, but we only see a small fraction of them because the jet doesn’t line up all that often. Gravitational waves are a whole new way to find this kind of event, and they might be more common than we think.”

These observations confirm the prediction made by the second author of the paper, Dr. Gavin Lamb from the University of Leicester’s Department of Physics and Astronomy, said that these types of events will reveal the structure of these jets of material travelling close to the speed of light:

“The behaviour of the light from these jets, how it brightens and fades, can be used to determine the velocity of the material throughout the jet. As the afterglow brightens we are seeing deeper into the jet structure and probing the fastest components. This will help us understand how these jets of material, travelling close to the speed of light, are formed and how they are accelerated to these phenomenal velocities.”