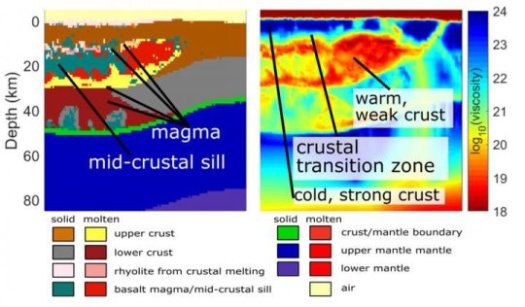 Yellowstone, a supervolcano famous for explosive eruptions, large calderas and extensive lava flows, has for years attracted the attention of scientists trying to understand the location and size of magma chambers below it. The last caldera forming eruption occurred 630,000 years ago; the last large volume of lava surfaced 70,000 years ago.

Crust below the park is heated and softened by continuous infusions of magma that rise from an anomaly called a mantle plume, similar to the source of the magma at Hawaii’s Kilauea volcano. Huge amounts of water that fuel the dramatic geysers and hot springs at Yellowstone cool the crust and prevent it from becoming too hot.

With computer modeling, a team led by UO doctoral student Dylan P. Colón has shed light on what’s going on below. At depths of 5-10 kilometers (3-6 miles) opposing forces counter each other, forming a transition zone where cold and rigid rocks of the upper crust give way to hot, ductile and even partially molten rock below, the team reports in a paper in Geophysical Research Letters.

This transition traps rising magmas and causes them to accumulate and solidify in a large horizontal body called a sill, which can be up to 15 kilometers (9 miles) thick, according to the team’s computer modeling.

“The results of the modeling matches observations done by sending seismic waves through the area,” said co-author Ilya Bindeman, a professor in the UO’s Department of Earth Sciences. “This work appears to validate initial assumptions and gives us more information about Yellowstone’s magma locations.”

This mid-crustal sill is comprised of mostly solidified gabbro, a rock formed from cooled magma. Above and below lay separate magma bodies. The upper one contains the sticky and gas-rich rhyolitic magma that occasionally erupts in explosions that dwarf the 1980 eruption of Mount St. Helens in Washington state.

Similar structures may exist under super volcanoes around the world, Colón said. The geometry of the sill also may explain differing chemical signatures in eruptive materials, he said.

Colón’s project to model what’s below the nation’s first national park, which was sculpted 2 million years ago by volcanic activity, began soon after a 2014 paper in Geophysical Research Letters by a University of Utah-led team revealed evidence from seismic waves of a large magma body in the upper crust.

Scientists had suspected, however, that huge amounts of carbon dioxide and helium escaping from the ground indicated that more magma is located farther down. That mystery was solved in May 2015, when a second University of Utah-led study, published in the journal Science, identified by way of seismic waves a second, larger body of magma at depths of 20 to 45 kilometers (12-27 miles).

However, Colón said, the seismic-imaging studies could not identify the composition, state and amount of magma in these magma bodies, or how and why they formed there.

To understand the two structures, UO researchers wrote new codes for supercomputer modeling to understand where magma is likely to accumulate in the crust. The work was done in collaboration with researchers at the Swiss Federal Institute of Technology, also known as ETH Zurich.

The researchers repeatedly got results indicating a large layer of cooled magma with a high melting point forms at the mid-crustal sill, separating two magma bodies with magma at a lower melting point, much of which is derived from melting of the crust.

“We think that this structure is what causes the rhyolite-basalt volcanism throughout the Yellowstone hotspot, including supervolcanic eruptions,” Bindeman said. “This is the nursery, a geological and petrological match with eruptive products. Our modeling helps to identify the geologic structure of where the rhyolitic material is located.”

The new research, for now, does not help to predict the timing of future eruptions. Instead, it provides a never-before-seen look that helps explain the structure of the magmatic plumbing system that fuels these eruptions, Colón said. It shows where the eruptible magma originates and accumulates, which could help with prediction efforts further down the line.

“This research also helps to explain some of the chemical signatures that are seen in eruptive materials,” Colón said. “We can also use it to explore how hot the mantle plume is by comparing models of different plumes to the actual situation at Yellowstone that we understand from the geologic record.”

Colón is now exploring what influences the chemical composition of magmas that erupt at volcanoes like Yellowstone.

Studying the interaction of rising magmas with the crustal transition zone, and how this influences the properties of the magma bodies that form both above and below it, the scientists wrote, should boost scientific understanding of how mantle plumes influence the evolution and structure of continental crust.