A team of Brazilian astronomers, led by Denilso Camargo of the Federal University of Rio Grande do Sul in Porto Alegre, has discovered seven new embedded clusters located unusually far away from the Milky Way’s disc. The findings, presented in a paper published July 3 on arXiv.org, could provide new insights on star cluster formation.

Embedded clusters are stellar clusters encased in an interstellar dust or gas, consisting of extremely young stars. They are crucial for astronomers to better understand star formation and early stellar evolution. Studying these clusters could reveal the origin of stellar masses as well as the origin and evolution of protoplanetary disks, where planet formation processes take place. 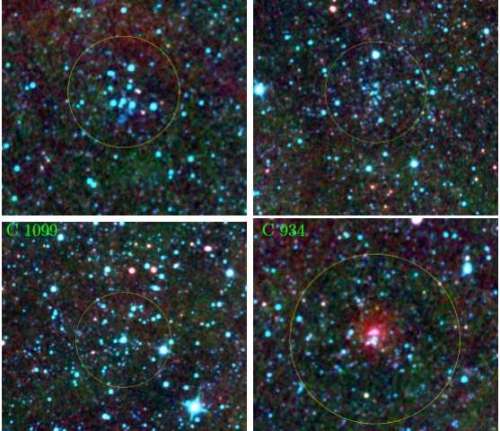 In the Milky Way galaxy, most of embedded clusters lie within the thin disc less than 1,000 light years from the galactic midplane, especially in the spiral arms. However, Camargo and his team detected two young stellar clusters earlier this year, and now, after spotting seven more, suggest that they could be more common on the outskirts of the galaxy than previously thought.

“Now, we discovered seven star clusters far away from the Milky Way disc. Thus, this work points to a new paradigm in the star and star cluster formation, in the sense that the formation of such objects occurs in the halo and it seems to be frequent,” Camargo told Phys.org.

The scientists found the new clusters by analyzing the data provided by NASA’s Wide-field Infrared Survey Explorer (WISE). This space telescope is monitoring the entire galaxy in infrared light, snapping pictures of mainly remote galaxies, stars and asteroids. WISE was chosen for this job as it captures embedded clusters that are invisible at optical wavelengths, due to the fact that they are engulfed in significant amounts of interstellar dust.

“WISE provided infrared images of the entire sky, allowing us to penetrate the gas and dust within giant molecular clouds, in which the star formation can take place. Recently, we discovered more than 1,000 embedded clusters using WISE,” Camargo said.

According to the research paper, three newly found objects, designated C 932, C 934, and C 939, are high-latitude embedded clusters, projected within the newly identiﬁed cloud complex. These clusters are located at a vertical distance of about 16,300 light years below the galactic disc. Other new clusters, named C 1074, C 1099, C 1100, and C 1101, are in the range from 5,500 to 10,400 light years above the disc. All these clusters are younger than five million years.

“The discovery of stellar clusters far away from the disc suggests that the Galactic halo is more actively forming stars than previously thought. Moreover, since most young clusters do not survive for more than five million years, the halo may be raining stars into the disc. The halo harbors generations of stars formed in clusters like those hereby detected,” Camargo said.

Before the team’s paper was published, it was thought that star formation processes in the Milky Way occur in the disk, but not in the halo. Thus, as Camargo concluded, this new study represents a paradigm shift, in the sense that a sterile halo becomes now a host of ongoing star formation.