An international team of astronomers has determined that Centaurus A, a massive elliptical galaxy 13 million light-years from Earth, is accompanied by a number of dwarf satellite galaxies orbiting the main body in a narrow disk. In a paper published today in Science, the researchers note that this is the first time such a galactic arrangement has been observed outside the Local Group, home to the Milky Way. 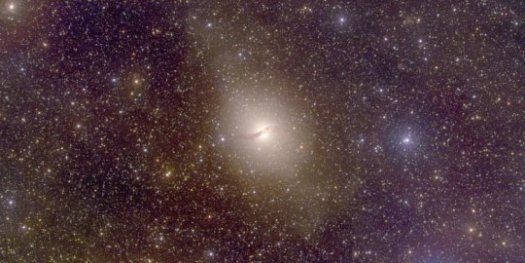 “The significance of this finding is that it calls into question the validity of certain cosmological models and simulations as explanations for the distribution of host and satellite galaxies in the universe,” said co-author Marcel Pawlowski, a Hubble Fellow in the Department of Physics & Astronomy at the University of California, Irvine.

He said that under the lambda cold dark matter model, smaller systems of stars should be more or less randomly scattered around their anchoring galaxies and should move in all directions. Yet Centaurus A is the third documented example, behind the Milky Way and Andromeda, of a “vast polar structure” in which satellite dwarves co-rotate around a central galactic mass in what Pawlowski calls “preferentially oriented alignment.”

The difficulty of studying the movements of dwarf satellites around their hosts varies according to the target galaxy group. It’s relatively easy for the Milky Way. “You get proper motions,” Pawlowski said. “You take a picture now, wait three years or more, and then take another picture to see how the stars have moved; that gives you the tangential velocity.”

Using this technique, scientists have measurements for 11 Milky Way satellite galaxies, eight of which are orbiting in a tight disk perpendicular to the spiral galaxy’s plane. There are probably other satellites in the system that can’t be seen from Earth because they’re blocked by the Milky Way’s dusty disk.

Andromeda provides observers on Earth a view of the full distribution of satellites around the galaxy’s sprawling spiral. An earlier study found 27 dwarf galaxies, 15 arranged in a narrow plane. And Andromeda offers another advantage, according to Pawlowski: “Because you see the galaxy almost edge-on, you can look at the line-of-sight velocities of its satellites to see the ones that are approaching and those that are receding, so it very clearly presents as a rotating disk.”

Centaurus A is much farther away, and its satellite companions are faint, making it more difficult to accurately measure distances and velocities to determine movements and distributions. But “sleeping in the archives,” Pawlowski said, were data on 16 of Centaurus A’s satellites.

“We could do the same game as with Andromeda, where we look at the line-of-sight velocities,” he said. “And again we see that half of them are red-shifted, meaning they are receding from us, and the other half are blue-shifted, which tells us they are approaching.”

The researchers were able to demonstrate that 14 of the 16 Centaurus A satellite galaxies follow a common motion pattern and rotate along the plane around the main galaxy — contradicting frequently used cosmological models and simulations suggesting that only about 0.5 percent of satellite galaxy systems in the nearby universe should exhibit this pattern.

“So this means that we are missing something,” Pawlowski said. “Either the simulations lack some important ingredient, or the underlying model is wrong. This research may be seen as support for looking into alternative models.”