One of the biggest mysteries of the Sun is why its upper atmosphere—also known as the corona—is over 200 times hotter than its surface. For some unknown reason, this region that extends millions of miles into space is superheated—while the surface temperature hovers around 5,500 degree Celsius, the corona can reach two million degrees Celsius. 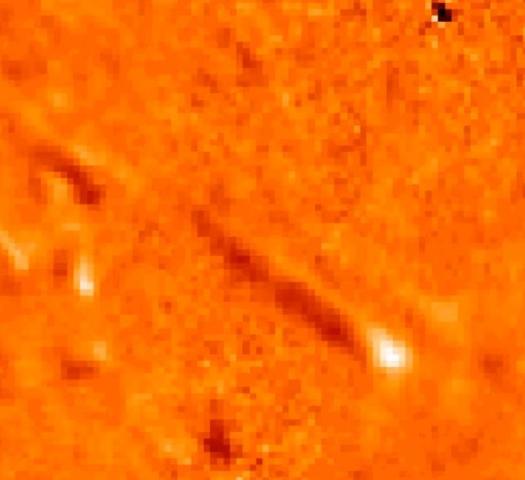 In a study published in Nature Astronomy, scientists with NASA are now edging closer to understanding this weird phenomenon.

While analyzing data taken by one of the space agency’s solar observation satellites, researchers discovered jets emerging from sunspots and shooting up to 3,000 miles into the inner corona. The jets had bulky heads and slim tails, so they looked like tadpoles swimming through the layers of the Sun.

Sunspots are regions that temporarily appear on the surface of the Sun. They are much cooler than the surrounding areas and are highly magnetized.

Previously, there were two main hypotheses about what was heating the Sun’s corona. The first relates to nanoflares, where explosions caused by the reconnection of magnetic lines release energy into the atmosphere, heating it in the process. The second involves electromagnetic waves, with charged particles being pushed into the Sun’s atmosphere. The tadpole discovery adds a third possibility to the mix.

Scientists found the tadpoles were made up entirely of plasma—the fourth state of matter, consisting of electrically conducting material made up of charged particles. The tadpoles (also known as ‘pseudo shocks’) may help heat up the Sun’s corona at specific times in its 11 year cycle—specifically during the solar maximum, when there is increased activity on the Sun’s surface.

The pseudo-shocks are thought to occur when magnetic field lines become tangled and produce explosions. This often happens around sunspots, but may well take place in other magnetized regions of space.

Computer simulations showed that the tadpoles could carry enough energy to heat the inner corona.

“We were looking for waves and plasma ejecta, but instead, we noticed these dynamical pseudo-shocks, like disconnected plasma jets, that are not like real shocks but highly energetic to fulfill Sun’s radiative losses,” lead author Abhishek Srivastava, from Indian Institute of Technology, said in a statement.

The Sun is currently coming to the end of its latest cycle—known as sunspot cycle 24—and will enter the next one at some point this year. As the new cycle begins, sunspot activity will begin to increase before reaching a peak, known as the solar maximum—currently expected to be around 2024.

Previously, scientists suggested that sunspot cycle 25 could be weaker than the current cycle, potentially meaning a period of global cooling could ensue. However, this has largely been ruled out, with a team of scientists in India recently predicting that the next solar cycle could be even stronger than the current one.

In their paper published in Nature Astronomy, the authors said: “We conclude that near-Earth and inter-planetary space environmental conditions and solar radiative forcing of climate over sunspot cycle 25 (i.e., the next decade) will likely be similar or marginally more extreme relative to what has been observed during the past decade over the current solar cycle.”