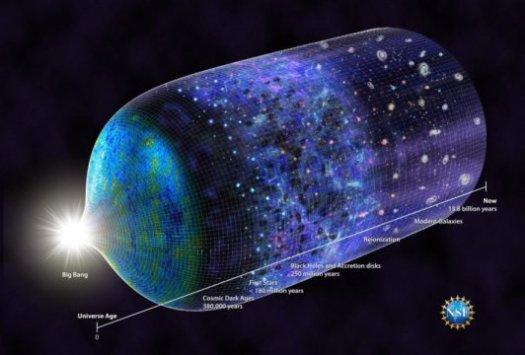 Then, for the next 50-100 million years, gravity slowly pulled the densest regions of gas together until ultimately the gas collapsed in some places to form the first stars.

What were those first stars like and when did they form? How did they affect the rest of the universe? These are questions astronomers and astrophysicists have long pondered.

Now, after 12 years of experimental effort, a team of scientists, led by ASU School of Earth and Space Exploration astronomer Judd Bowman, has detected the fingerprints of the earliest stars in the universe. Using radio signals, the detection provides the first evidence for the oldest ancestors in our cosmic family tree, born by a mere 180 million years after the universe began.

“There was a great technical challenge to making this detection, as sources of noise can be a thousand times brighter than the signal — it’s like being in the middle of a hurricane and trying to hear the flap of a hummingbird’s wing.” says Peter Kurczynski, the National Science Foundation program officer who supported this study. “These researchers with a small radio antenna in the desert have seen farther than the most powerful space telescopes, opening a new window on the early universe.”

To find these fingerprints, Bowman’s team used a ground-based instrument called a radio spectrometer, located at the Australia’s national science agency (CSIRO) Murchison Radio-astronomy Observatory (MRO) in Western Australia. Through their Experiment to Detect the Global EoR Signature (EDGES), the team measured the average radio spectrum of all the astronomical signals received across most of the southern-hemisphere sky and looked for small changes in power as a function of wavelength (or frequency).

As radio waves enter the ground-based antenna, they are amplified by a receiver, and then digitized and recorded by computer, similar to how FM radio receivers and TV receivers work. The difference is that the instrument is very precisely calibrated and designed to perform as uniformly as possible across many radio wavelengths.

The signals detected by the radio spectrometer in this study came from primordial hydrogen gas that filled the young universe and existed between all the stars and galaxies. These signals hold a wealth of information that opens a new window on how early stars — and later, black holes, and galaxies — formed and evolved.

“It is unlikely that we’ll be able to see any earlier into the history of stars in our lifetimes,” says Bowman. “This project shows that a promising new technique can work and has paved the way for decades of new astrophysical discoveries.”

This detection highlights the exceptional radio quietness of the MRO, particularly as the feature found by EDGES overlaps the frequency range used by FM radio stations. Australian national legislation limits the use of radio transmitters within 161.5 miles (260 km) of the site, substantially reducing interference which could otherwise drown out sensitive astronomy observations.

The results of this study have been recently published in Nature by Bowman, with co-authors Alan Rogers of the Massachusetts Institute of Technology’s Haystack Observatory, Raul Monsalve of the University of Colorado, and Thomas Mozdzen and Nivedita Mahesh also of ASU’s School of Earth and Space Exploration.

The results of this experiment confirm the general theoretical expectations of when the first stars formed and the most basic properties of early stars.

“What’s happening in this period,” says co-author Rogers of MIT’s Haystack Observatory, “is that some of the radiation from the very first stars is starting to allow hydrogen to be seen. It’s causing hydrogen to start absorbing the background radiation, so you start seeing it in silhouette, at particular radio frequencies. This is the first real signal that stars are starting to form, and starting to affect the medium around them.”

The team originally tuned their instrument to look later in cosmic time, but in 2015 decided to extend their search. “As soon as we switched our system to this lower range, we started seeing things that we felt might be a real signature,” Rogers says. “We see this dip most strongly at about 78 megahertz, and that frequency corresponds to roughly 180 million years after the Big Bang,” Rogers says. “In terms of a direct detection of a signal from the hydrogen gas itself, this has got to be the earliest.”

The study also revealed that gas in the universe was probably much colder than expected (less than half the expected temperature). This suggests that either astrophysicists’ theoretical efforts have overlooked something significant or that this may be the first evidence of non-standard physics: Specifically, that baryons (normal matter) may have interacted with dark matter and slowly lost energy to dark matter in the early universe, a concept that was originally proposed by Rennan Barkana of Tel Aviv University.

“If Barkana’s idea is confirmed,” says Bowman, “then we’ve learned something new and fundamental about the mysterious dark matter that makes up 85 percent of the matter in the universe, providing the first glimpse of physics beyond the standard model.”

The next steps in this line of research are for another instrument to confirm this team’s detection and to keep improving the performance of the instruments, so that more can be learned about the properties of early stars. “We worked very hard over the last two years to validate the detection,” says Bowman, “but having another group confirm it independently is a critical part of the scientific process.”

Bowman would also like to see an acceleration of efforts to bring on new radio telescopes like the Hydrogen Epoch of Reionization Array (HERA) and the Owens Valley Long Wavelength Array (OVRO-LWA).

“Now that we know this signal exists,” says Bowman, “we need to rapidly bring online new radio telescopes that will be able to mine the signal much more deeply.”

The antennas and portions of the receiver used in this experiment were designed and constructed by Rogers and the MIT Haystack Observatory team. The ASU team and Monsalve added the automated antenna reflection measurement system to the receiver, outfitted the control hut with the electronics, constructed the ground plane and conducted the field work for the project. The current version of EDGES is the result of years of design iteration and ongoing detailed technical refinement of the calibration instrumentation to reach the levels of precision necessary for successfully achieving this difficult measurement.