Those observing the Northern Lights in Norway over the weekend were treated not only to the spectacular aurora, but also reported strange configurations of colourful lights moving through the sky. 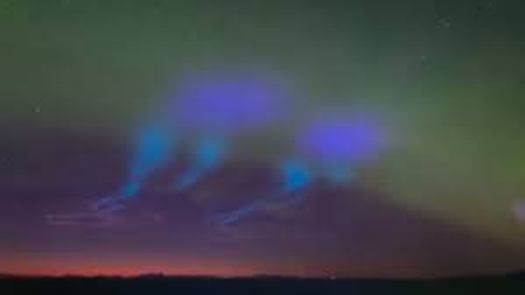 While those who witnessed it could be forgiven for preparing to pledge allegiance to some new extra-terrestrial conquistadors, Nasa has owned up and explained it was in fact a pair of their rockets which created the unusual phenomenon.

The stunning geometric lights, made up of dark blue clouds, turquoise dots and pale orange vapour trails, lit up the sky over the Norwegian Sea on April 5.

They were the result of an experiment designed to study the processes inside the Earth’s “polar cusp”, where the planet’s magnetic field lines bend down through the atmosphere.

It is here that the charged particles from solar wind cause aurora – the colourful natural light displays which appear over the poles during periods of solar activity.

Scientists want to study exactly what happens during an aurora in the electrically charged and turbulent layer of the outer atmosphere which Nasa describes as a “tumultuous particle soup”.

Their pair of rockets were carrying scientific instruments for studying the energy exchange during the phenomenon, and also deployed what they called “visible gas tracers”, between 71 and 150 miles altitude.

The mixture of substances are similar to those found in fireworks, with chemicals which ionize when exposed to sunlight.

The multi-coloured vapours produced “allow researchers to track the flow of neutral and charged particles with the auroral wind,” Nasa said.

The project is called AZURE, which stands for Auroral Zone Upwelling Rocket Experiment, and was carried out by two black Brant I-A sounding rockets, which were launched from the Andøya Space Centre in north-west Norway.

Michael Theusner who captured a stunning time lapse of the kaleidoscopic illuminations, said: “While we were watching the after-effects of a beautiful northern lights display, the rockets were launched from the Andøya Space Centre only about 180 km away to the north.

“We saw two orange dots rise into the sky and disappear. A short while later strange lights and colourful, expanding clouds appeared I first did not have an explanation for. It looked like an alien attack.”