Over the last two decades, sea ice steadily increased in the Southern Ocean, but starting in 2016, researchers were astonished by a rapid decline. This unforeseen diminishing of sea ice highlights the inadequacy of existing models of sea ice extent and thickness. This is significant because the Southern Ocean plays a key role in regulating the global carbon cycle by regulating the uptake of carbon and heat by the ocean.

One variable for which current models do not account is the stress of ocean waves on sea ice. A collaborative of European oceanographic researchers has now published a study of the effects of ocean waves on Southern Ocean sea ice using data from the Sentinel 1 constellation. The results are published in the Proceedings of the National Academy of Sciences.

To date, Sentinel 1 consists of two satellites, Sentinel 1a and Sentinel 1b, both equipped with C-band synthetic aperture radar, which provides very high resolution imagery from which researchers can derive wave height information. The researchers tested wave height data from thousands of Sentinel images against a model of an ice edge along the y axis with an x axis pointing into the ice and a narrow wave spectrum propagating toward direction Φ relative to the x axis.

Wind generates waves over ice-free oceans, which propagate over large distances, eventually reaching ice-covered water. Propagating waves redistribute the momentum from the wind over large regions, and impart that energy to sea ice through collision. Modeling shows that the stress created by these collisions impacts the ice edge.

Of particular interest is the rate of wave decay, or attenuation. Dampened waves in sea ice indicate that energy has been imparted to the ice edge, providing a decent metric for estimating the effects of waves on sea ice extent and thickness. However, as is often the case in scientific exploration, the results are complicated.

Although the researchers conclude that wave stress is an important factor in sea ice evolution, particularly within a few hundred kilometers of the sea ice, such stresses are highly variable. They report that wave decay can happen much more quickly than previously believed, but attenuation is highly variable.

“Clearly, the strong year-round wave forcing in the Southern Ocean provides a significant force that should help maintain a compact ice edge,” the authors write, adding that associated wave motions “likely also contribute to floe breakup and rafting, resulting in the rougher (and potentially thicker) sea ice observed by scatterometers near the ice edge.”

The authors believe the dataset produced by their study could contribute to coupled wave-ice interaction models currently under development.

In a drying time, Mars may have been kept warm enough for liquid water to remain stable on the surface thanks to explosive bursts of methane gas, a new study finds.

The simulations, described in the journal Nature Geoscience, could explain how Mars managed to sustain a series of lakes in a climate that at first glance seems too cold and arid to have done so.

Since landing on the Red Planet in August 2012, NASA’s rover Curiosity has discovered that 96-mile-wide Gale Crater held a series of lakes around 3.5 billion years ago. The rocks it has drilled and X-rayed and lasered have also revealed environments that would have been potentially habitable for Earth-like life.

Keep in mind, however, that Mars’ wettest period was likely the first billion years of its 4.6 billion-year life, the Noachian period, when it had a thicker atmosphere that would have been better able to keep liquid water stable on the planet’s surface.

“Although the climate was relatively cold compared to Earth, there is evidence that liquid water flowed in streams and rivers, formed alluvial fans and deltas, and ponded in big lakes and possibly seas,” Alberto Fairen of the Centro de Astrobiologia in Spain and Cornell University, who was not involved in the paper, wrote in a commentary.

Then came the 600 million-year Hesperian period, when the Red Planet began to transform from a cold, wet world to a cold, icy one, as the protective atmosphere thinned and the planet’s interior cooled. The next 3 billion years until now are known as the Amazonian period, during which Mars solidified its reputation as the cold, dry planet we see today.

So here’s the thing that’s puzzled planetary scientists: Gale Crater’s rocks bear evidence of liquid water on Mars during the Hesperian period, including lakes (perhaps protected by a layer of surface ice) and deltas. But that means these lakes and deltas persisted during a period that was markedly drier, with a thinner atmosphere less capable of sustaining liquid water. How do these two facts square up?

“Previous hypotheses have struggled to explain lake-forming climates that are both rare and long-lasting,” Fairen wrote. “For example, volcanism and impacts can produce episodes of climate warming, but not of sufficiently long duration.”

Now, lead author Edwin Kite, a planetary scientist the University of Chicago, and his colleagues say that after running climate models they’ve come up with an explanation: explosive bursts of methane.

Here’s how it works. The Red Planet’s obliquity, or tilt on its axis, can vary far more dramatically than Earth’s does. The researchers think that occasional dramatic shifts in that tilt (perhaps around 10 to 20 degrees) would have exposed ice-covered parts of the Martian surface to the sun, causing that cover to shrink fairly quickly. The ice’s retreat would have exposed clathrates filled with pockets of methane, allowing the methane to burst out of the ground and into the atmosphere.

Methane is a powerful greenhouse gas – about 25 times as powerful as carbon dioxide. So if enough of it were to emerge from the ground at the same time, it could actually result in a significant amount of warming, the thinking goes.

Now, eventually, methane gets broken down by sunlight. But in the meantime, Kite and his colleagues found that it could lead to warming lasting hundreds of thousands of years – long enough to explain the extended presence of liquid water during this otherwise dry time in Martian history, scientists say.

What does this mean for the possibility that life could have emerged on Mars? Kite was quick to point out that if any microbes ever lived on the Red Planet, they would likely have done so during its earliest days, when water was far more abundant.

“If life ever established itself on Mars, then it would have probably done so before the relatively young (less than 3.6 billion years ago) features modeled in our paper,” Kite wrote in an email.

Regardless, the study reveals an increasingly complex portrait of a planet in transition, scientists said.

“The methane burst scenario proposed by Kite et al. contributes to an emerging view that the existence of liquid water on early Mars arose from a combination of diverse astronomical, geochemical and geological factors,” Fairen wrote. “Although it seems unlikely that a single mechanism can explain not only the presence of liquid water, but its recurrence and persistence, the methane burst hypothesis provides a means to episodically tip the Hesperian climate over the edge.”

Pluto has some characteristics less like that of a comet and more like much larger planets, according to an analysis of Pluto’s unique interaction with the solar wind, scientists say. 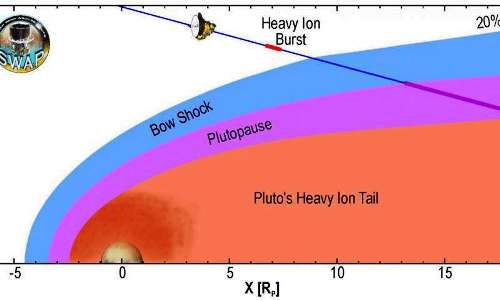 Using data from an instrument aboard the New Horizons spacecraft gathered on its Pluto flyby in July 2015, scientists have observed the material coming off of Pluto and seen how it interacts with the solar wind, and found it completely new – and unexpected.

“This is a type of interaction we’ve never seen before anywhere in our solar system,” said David J. McComas, lead author of the new study published today in the Journal of Geophysical Research – Space Physics, a publication of the American Geophysical Union.

McComas, professor in Princeton University’s Department of Astrophysical Sciences and vice president for the Princeton Plasma Physics Laboratory, leads the Solar Wind Around Pluto (SWAP) instrument aboard New Horizons; he also led development of SWAP when he was at the Southwest Research Institute (SwRI) in Texas. The research was funded as a part of the New Horizons project by NASA.

Space physicists say that they now have a treasure trove of information about how Pluto’s atmosphere interacts with the solar wind. Solar wind is the plasma, or charged particles, that spews off from the sun into the solar system at a supersonic 400 kilometers per second (1 million miles per hour), bathing planets, asteroids, comets and interplanetary space in a soup of mostly electrons and protons.

“The results are astonishing. We were fascinated and surprised” by the findings, McComas said.

Previously, most researchers thought that Pluto was characterized more like a comet, which has a large region of gentle slowing of the solar wind, as opposed to the abrupt diversion solar wind encounters at a planet like Mars or Venus. Instead, like a car that’s part gas- and part battery-powered, Pluto is a hybrid, the researchers say.

“This is an intermediate interaction, a completely new type. It’s not comet-like, and it’s not planet-like. It’s in-between,” McComas said. “We’ve now visited all nine of the classical planets and examined all their solar wind interactions, and we’ve never seen anything like this.” 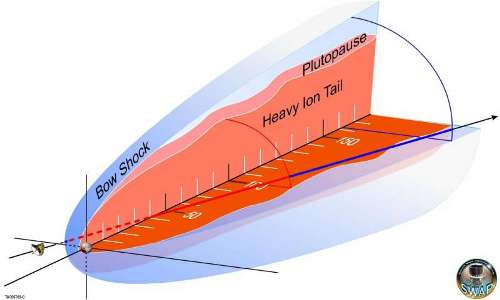 “These results speak to the power of exploration. Once again we’ve gone to a new kind of place and found ourselves discovering entirely new kinds of expressions in nature,” said Alan Stern, New Horizons principal investigator at the Southwest Research Institute. “Many people were surprised by Pluto’s complex geology and atmosphere. This paper shows there’s even more that’s surprising there, including its atmosphere-solar wind interaction.”

Pluto continues to confound. Since it’s so far from the sun – an average of about 5.9 billion kilometers (3.7 billion miles) – and because it’s so small, scientists thought Pluto’s gravity would not be strong enough to hold heavy ions in its extended atmosphere. But, “Pluto’s gravity clearly is enough to keep material sufficiently confined,” McComas said.

Further, the scientists found that very little of Pluto’s atmosphere is comprised of neutral particles converted to electrically charged ions and swept out into space.

“This is backwards for many other planets, where the neutral particles stay relatively close to the planet,” said Michael Liemohn, a University of Michigan astrophysicist and Editor-in-Chief of JGR-Space Physics, who was not involved with the research but who helped edit the paper. “An ion particle becomes influenced by the electric and magnetic forces present in the solar system, which can be a very efficient acceleration processes. But at Pluto, McComas et al found that only a wisp of atmosphere leaves the planet as ions.”

The researchers were able to separate the heavy ions of methane, the main gas escaping from Pluto’s atmosphere, from the light ions of hydrogen that come from the sun using the SWAP instrument.

Among their Pluto findings:

– Like Earth, Pluto has a long ion tail, that extends downwind at least a distance of about 100 Pluto radii (119,000 kilometers (73,800 miles), almost three times the circumference of Earth), loaded with heavy ions from the atmosphere and with “considerable structure;”

– Pluto has a very thin “Plutopause” – or boundary of Pluto’s tail of heavy ions and the sheath of the shocked solar wind that presents an obstacle to its flow.
The scientists write: “Pluto interaction with the solar wind appears to be a hybrid with the bow shock generated by mass-loading like at a comet, but the obstacle to the solar wind flow – the Plutopause – sustained by atmospheric thermal pressure as at Venus and Mars.”

Heather Elliott, astrophysicist at Southwest Research Institute and co-author on the paper, said that the study provides interesting comparisons. “Comparing the solar wind-Pluto interaction to the solar wind-interaction for other planets and bodies is interesting because the physical conditions are different for each, and the dominant physical processes depend on those conditions,” Elliott said.

The scientists conclude: “The SWAP data will … be reanalyzed … for many years to come as the community collectively grapples with Pluto’s unique solar wind interaction – one that is unlike that at any other body in the solar system.”