Research from the University of Texas at Arlington and the Wadia Institute of Himalayan Geology suggests that hydrogen, oxygen, water and carbon dioxide are being generated in the earth’s mantle hundreds of kilometers below the earth’s surface. 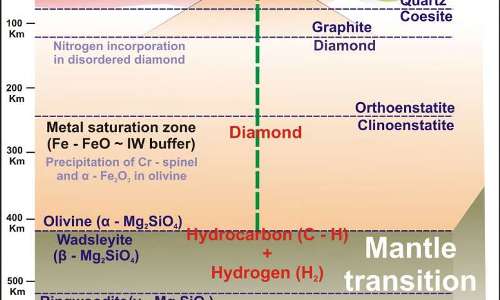 “This discovery is important as it shows how earth’s planetary evolution may have happened,” said Asish Basu, UTA professor of earth and environmental sciences and co-author of the cover paper published in Geology in August.

The researchers focused their attention on a seven-kilometer thick portion of the earth’s upper mantle now found in the High Himalayas, at altitudes between 12,000 and 16,000 feet. This section of the mantle was pushed upwards to the top of the mountains as a result of the Indian Plate pushing north into Asia, displacing the ancient Tethys ocean floor and underlying mantle to create the Himalayan Mountain Belt around 55 million years ago.

“This is important as it means that we can analyze the nature of the mantle under the earth’s crust, at depths where drilling cannot reach,” Basu explained. “One key initial discovery was finding microdiamonds whose host rocks originated in the mantle transition zone, at depths between 410 and 660 kilometers below the earth’s surface.”

By studying the host rocks and associated minerals, the scientists had a unique opportunity to probe the nature of the deep mantle. They found primary hydrocarbon and hydrogen fluid inclusions along with microdiamonds by using Laser Raman Spectroscopic study. The discovery also showed that the environment in the deep mantle transition zone depths where the diamond is formed is devoid of oxygen.

The researchers suggest that during the advective transport or mantle up-welling into shallower mantle zones, the hydrocarbon fluids become oxidized and precipitate diamond, a mechanism that may also be responsible for forming larger diamonds like the world’s most valuable, Koh-i-Noor or Mountain of Light diamond, now in the Queen of England’s crown.

“This means that many of the key compounds affecting evolution like carbon dioxide and water are generated within the mantle,” he added.