A new study published Wednesday in Nature reports that the moon may not have always had the same face pointed toward the Earth. Instead, the “Man in the Moon” nodded up and down, because of heating and volcanic eruptions on the Earth-facing side of the moon. 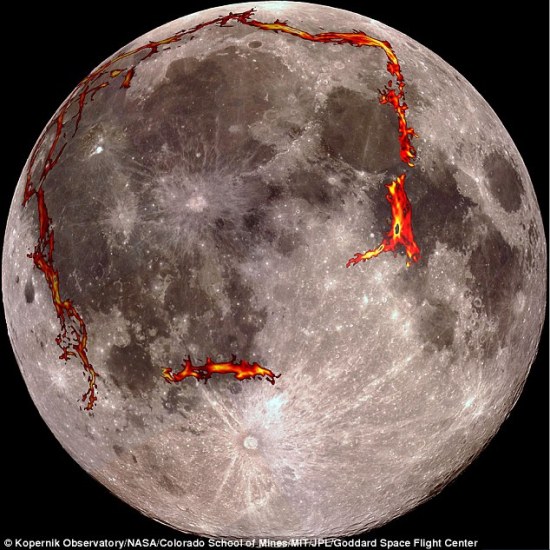 An international team including University of Arizona planetary scientists James Keane and Isamu Matsuyama made this discovery while trying to explain maps of lunar polar hydrogen. This hydrogen, which was discovered by NASA’s Lunar Prospector mission in the 1990s, is believed to represent water ice, protected from the Sun’s rays in cold, permanently shadowed craters near the moon’s north and south poles. If ice were exposed to direct sunlight on the moon, it would boil off into space, so it is a very sensitive tracer of the moon’s orientation with time.

“Weirdly, the moon’s ice isn’t exactly at the coldest spots on the north or south poles of the moon,” said Matt Siegler, a scientist with the Planetary Science Institute in Tucson and the paper’s first author.

Instead, the polar ice is shifted off the poles by about six degrees, and in exact opposite directions at either pole. (On the Earth, six degrees is about equal to the distance from Tucson to Los Angeles.) This precisely opposite (“antipodal”) relationship indicates that the moon’s spin axis – the imaginary line that runs from the north pole, through the center of the moon, to the south pole, and around which the moon rotates – shifted over the last few billion years. As the moon reoriented, it left behind a trail of water ice, effectively “painting out” the path that the poles took with time.

When the research team realized that the moon’s ice might be telling a story of reorientation, it turned to UA experts in planetary dynamics, Keane and Matsuyama.
“Usually we think of planets as ‘spinning on’ in the same unchanging way with time, but that’s not true,” said Keane, a graduate student at the UA’s Lunar and Planetary Laboratory. “We know that the Earth and a handful of other planetary bodies have changed their spin axes with time.”

On the Earth, this reorientation can be measured with GPS and techniques that we don’t have on other planets. This forces scientists to look for clues in other, more unusual datasets. For example, Matsuyama, a professor of planetary science at LPL and Keane’s doctoral advisor, recently used gravity measurements and observations of ancient valley networks on Mars to infer reorientation on that planet. This study is the first to use lunar ice to infer the change in the spin of the moon.

The spins of planetary bodies are set by how mass is distributed within the planet: A planet’s denser spots try to drag the planet toward its equator, less dense spots toward the pole. On the moon, tidal forces from the Earth also can drag dense spots toward – or away from – the Earth-facing side of the moon. Scientists refer to this reorientation phenomenon as “true polar wander.”

Using this idea that the moon’s ice traces an earlier spin pole, Keane used a combination of theoretical models and measurements of the moon’s mass distribution from NASA missions to identify what could physically cause this polar wander.

“I was shocked when the models outlined Oceanus Procellarum as the only possible geologic feature that could have done this,” Keane said.

Oceanus Procellarum is a vast, volcanic province on the Earth-facing side of the moon. It contains all of the dark splotches we see forming the “face” of the moon, which is actually a giant field of ancient lava flows. When the moon formed, many of the body’s radioactive elements ended up in the Procellarum.
“This radioactive crust acted liked an oven broiler heating and melting the mantle below,” Siegler said.

The giant Procellarum hot spot was less dense than the rest of the moon and caused the whole moon to move. As the moon slowly moved over billions of years, it etched a path into the polar ice.

The paper shows that the moon may have once had much more ice near its poles and the ice we see today is the tiny portion, which has survived this polar migration. Large amounts of ice could have been brought to the moon by comets and icy asteroids early in the moon’s history or potentially outgassed from the lunar mare themselves. Figuring out the origin of this ancient lunar water might also help scientists understand how water was delivered to the early Earth.

“This gives us a way to model exactly where the ice should be, which tells us about its origin and where astronauts might find a drink on future missions to the moon,” Siegler said.

“Up until this work, most researchers thought that the moon’s water was just recently deposited, as a late veneer,” Keane said. “Since we’ve shown that the moon’s water is linked to volcanic activity on the moon several billion years ago, this means it might be a time capsule of primordial water. Directly sampling this ancient ice will allow us to investigate many still unanswered questions around the origin of the Earth’s water.”

This project was supported in part by NASA’s SSERVI VORTICES node, the Lunar Reconnaissance Orbiter and the NASA Lunar Advanced Science and Exploration Research, or LASER, program.