A new study shows that an atmosphere was produced around the ancient Moon, 3 to 4 billion years ago, when intense volcanic eruptions spewed gases above the surface faster than they could escape to space. The study was published in Earth and Planetary Science Letters. 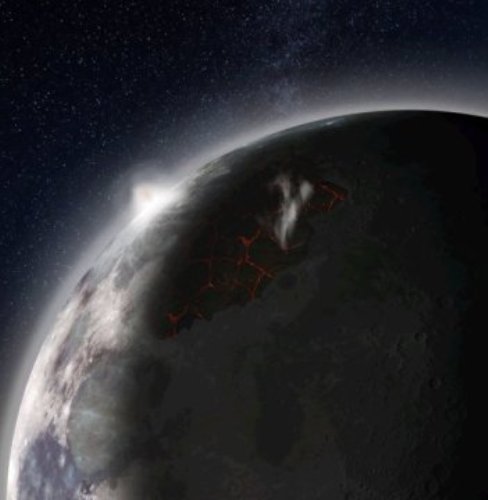 When one looks up at the Moon, dark surfaces of volcanic basalt can be easily seen to fill large impact basins. Those seas of basalt, known as maria, erupted while the interior of the Moon was still hot and generating magmatic plumes that sometimes breached the lunar surface and flowed for hundreds of kilometers. Analyses of Apollo samples indicate those magmas carried gas components, such as carbon monoxide, the ingredients for water, sulfur, and other volatile species.

In new work, Dr. Debra H. Needham, Research Scientist of NASA Marshall Space Flight Center, and Dr. David A. Kring, Senior Staff Scientist, at the Lunar and Planetary Institute, calculated the amounts of gases that rose from the erupting lavas as they flowed over the surface and showed that those gases accumulated around the Moon to form a transient atmosphere. The atmosphere was thickest during the peak in volcanic activity about 3.5 billion years ago and, when created, would have persisted for about 70 million years before being lost to space.

The two largest pulses of gases were produced when lava seas filled the Serenitatis and Imbrium basins about 3.8 and 3.5 billion years ago, respectively. The margins of those lava seas were explored by astronauts of the Apollo 15 and 17 missions, who collected samples that not only provided the ages of the eruptions, but also contained evidence of the gases produced from the erupting lunar lavas.

This new picture of the Moon has important implications for future exploration. The analysis of Needham and Kring quantifies a source of volatiles that may have been trapped from the atmosphere into cold, permanently shadowed regions near the lunar poles and, thus, may provide a source of ice suitable for a sustained lunar exploration program. Volatiles trapped in icy deposits could provide air and fuel for astronauts conducting lunar surface operations and, potentially, for missions beyond the Moon.

The new research was initiated from the LPI-Johnson Space Center’s Center for Lunar Science and Exploration, led by Kring and supported by NASA’s Solar System Exploration Research Virtual Institute. Needham is a former postdoctoral researcher at the LPI.