The Sun is located inside one of the spiral arms of the Milky Way galaxy, roughly two-thirds of the way from the galactic center to the outer regions. Because we are inside the galaxy, obscuration by dust and the confusion of sources along our lines-of-sight make mapping the galaxy a difficult task. Astronomers think that the galaxy is a symmetric spiral, and about 10 years ago, CfA astronomers Tom Dame and Pat Thaddeus, using millimeter observations of the gas carbon monoxide, discovered symmetric components to the spiral arms deep in the inner galaxy that lent support to this model. 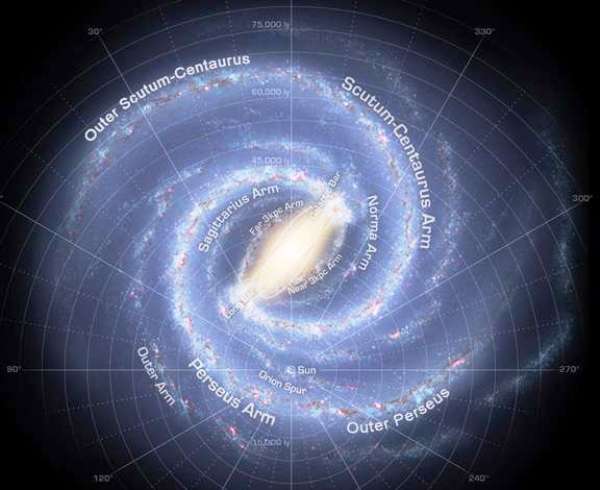 The galaxy is not perfectly flat. It has a slight warp that allows some distant structures, at least in the direction of the constellations of Scutum and Centaurus, to be seen more distinctly above much of the foreground confusion. In 2011 the same CfA astronomers were the first to discover a large-scale spiral feature within this distant warp which they called the “Outer Scutum–Centaurus Arm (OSC).” Subsequent studies placed the OSC at a distance from the galactic center of over forty thousand light-years; it appears to be a symmetric counterpart to a spiral arm on the opposite side, in the direction of Perseus.

CfA astronomer Tom Dame has joined with a set of collaborators to probe the extent of massive star formation in the OSC; sadly, his colleague Pat Thaddeus passed away earlier this year. Using radio measurements of ionized gas, which traces the hot ultraviolet from massive young stars, as well as bright emission from masers associated with massive star formation, the scientists observed 140 candidate locations and discovered evidence for massive young stars in about sixty percent of them. The study shows that the OSC is forming new stars, some with as much as forty solar masses each. These stars and their associated ionized environments, at least as far as we know now, mark the outer boundary for massive star formation in the Milky Way.