The star forming molecular clump W43-MM1 is very massive and dense, containing about 2100 solar masses of material in a region only one-third of a light year across (for comparison, the nearest star to the Sun is a bit over four light years away). 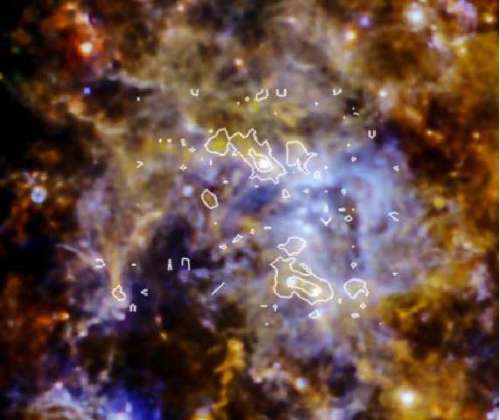 Previous observations of this clump found evidence for infalling motions (signaling that material is still accumulating onto a new star) and weak magnetic fields. These fields are detected by looking for polarized light, which is produced when radiation scatters off of elongated dust grains aligned by magnetic fields. The Submillimeter Array recently probed this source with high spatial resolutions and found evidence for even stronger magnetic fields in places. One of the outstanding issues in star formation is the extent to which magnetic fields inhibit the collapse of material onto stars, and this source seems to offer a particularly useful example.

CfA astronomers Josep Girart and TK Sridharan and their colleagues have used the ALMA submillimeter facility to obtain images with spatial scales as small as 0.03 light years. Their detailed polarization maps show that the magnetic field is well ordered all across the clump, which itself is actually fifteen smaller fragments, one of which (at 312 solar masses) appears to be the most massive fragment known.

The scientists analyze the magnetic field strengths and show that, even in the least massive fragment the field is not strong enough to inhibit gravitational collapse. In fact, they find indications that gravity, as it pulls material inward, drags the magnetic field lines along. They are, however, unable to rule out possible further fragmentation. The research is the most precise study of magnetic fields in star forming massive clumps yet undertaken, and provides a new reference point for theoretical models.