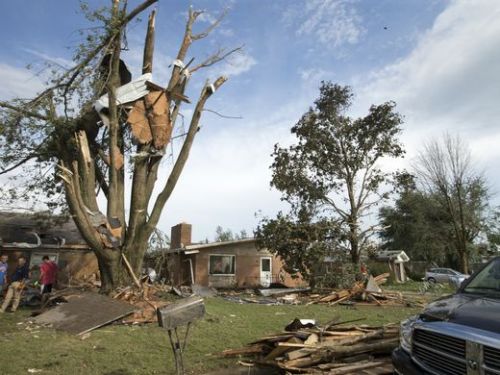 More than 18,000 Duke Energy customers were still without power Thursday morning, more than 17,000 of those affected were in Kokomo, which weathered the worst of the storm damage.

“We are very blessed to tell you we don’t have any serious injuries,” Howard County Sheriff Steve Rogers said during a news conference this morning.

Six of the tornadoes were produced by a single line of “supercell” storm clouds. Two more thunderstorms produced separate tornadoes in Avon and to the northwest of Lafayette.

“We’re all very grateful that there were no fatalities and no serious injuries,” Goodnight said.

The damage followed a similar path to the tornadoes that struck Kokomo in November 2013, Goodnight said.

“Our hearts are with the people who have experienced this twice,” Goodnight said.

Earlier: At least two confirmed tornadoes ripped through Central Indiana on Wednesday, causing only minor injuries but damaging several homes and leaving more than 30,000 people without power, including 3,400 in Indianapolis.

The most damage appeared to occur in Kokomo, where an EF-3 tornado leveled a Starbucks and tore roofs off of apartment buildings, causing city and Howard County officials to declare states of emergency. Wind speeds typically associated with an EF-3 can range anywhere from 136 to 165 mph, according to the National Weather Service.

“Multiple lightning. The sky got black. Wind came through like a train, and everything went black,” said Bob Esposito, a Kokomo resident.

An EF-1 tornado, which can reach wind speeds of 111 to 135 mph, also touched down just east of Crawfordsville in Montgomery County. Tornado watches or warnings were issued in more than 30 counties in Indiana, spanning from Owen and Putnam counties in the west and across the state line and into parts of eastern Ohio. They extended as far north as Huntington and as far south as Bloomington and Columbus.

About a dozen people suffered minor injuries across the state, said Indiana State Police spokesman Capt. David Bursten, with most of those injuries in Howard County. A 5-month-old child suffered a deep cut in Montgomery County, Bursten said.

The storms pulled Gov. Mike Pence off the campaign trail in North Carolina and back to Indiana. The Republican vice presidential candidate visited the state’s emergency operations center in Indianapolis. Pence announced that he and Lt. Gov. Eric Holcomb plan to survey storm damage in Howard and Montgomery counties on Thursday.

Pence said he would remain in the state “as long as we need” to make sure Hoosiers received the support they needed.

The full extent of the damage sustained in Kokomo — and the rest of the state — was still mostly unknown by sundown.

“It’s a long process, especially when there’s a lot of damage to look at,” said Joe Skowronek, a weather service meteorologist. He added that the potential for severe weather would continue into Thursday, as the forecast included many of the same conditions as Wednesday. Thursday’s high was forecast to be 88 degrees with a 30 percent chance of storms.

In Indianapolis, numerous storm warnings blasted through the day, urging Hoosiers to seek shelter after multiple funnel clouds were reported in the city and surrounding area. Tornado warnings remained in effect for much of the state until 9 p.m.

The Indianapolis Department of Homeland Security tweeted that police confirmed at least three funnel clouds in the city.

Funnel clouds were spotted near the Indiana State Fairgrounds and near 38th Street and Georgetown Road, as well as on the city’s east side in the 200 block of South Shortridge Road, according to the Department of Homeland Security.

A tornado was reportedly on the ground on the city’s east side, near 21st Street and Ritter Avenue, but that remained unconfirmed by Wednesday evening.

“It was just twirling,” said Grover Edwards, 49, who works at a cellphone shop at the intersection of 21st and Ritter. “It didn’t destroy nothing, but just twirled and kind of flew over.”

Heavy rain followed the funnel cloud sighting. Edwards took shelter inside the shop until things calmed down. Across the street, Yasmin Betancourt and Michael Christen of Hoosier Lottery were installing ticket machines at a new gas station when they noticed “the clouds feeding into themselves.”

“It was the weirdest thing I’ve ever seen,” Betancourt said. “(The clouds) were moving upward into this massive rotation.”

When Christen and Betancourt stepped outside to capture the scene on their phones, they saw three young children hunkered down at a bus stop.

“We felt responsible (for them),” Betancourt said. “So we went out there and took care of those three kids.”

They brought the children inside the gas station and waited for the storm to pass.

At Center for Inquiry School 27 at 545 E. 19th St., fourth-grader Jada Collins was the last student to leave.

“It was kind of scary because the lights kept switching on and off,” said Collins, 10. “I know about tornadoes, that they are dangerous, but I felt safe because we were all together.”

More than 400 students and 100 parents huddled in the hallways from dismissal time at 3:45 p.m. until 6:16 p.m. As the tornado warnings kept coming, then were lifted, the students and parents alternately relaxed, then curled-up against the wall, with knees bent to their chests and their heads covered with their arms, Principal Brandi Herbert said.

“I was so proud of everyone, the way they took care of each other and stayed calm,” Herbert said. ”We practice it often, and it paid off. It’s the ‘sheltering-in-place drill,’ and we kept them away from doors and windows.”

The first parents to arrive in cars came right as the first warnings to take shelter came in, and Herbert invited them inside. All were glad to ride out the storm with their children, she said.

The staff listened to the cackling weather radio in the principal’s office as it blared out warnings. Herbert said she kept the students informed with updates over the speakers and updated parents whose children take the bus about when they could pick them up.

The students were given snacks. Extracurricular activities were canceled. Finally, just before 6 p.m., IPS gave the all-clear to send the children home.

Jada’s father, Damon, 40, pulled up in a sport utility vehicle about 7 p.m. after a busy afternoon. His son Judah, a 5 year-old, was kept over at Joyce Kilmer School 69 and was in the car waiting for his sister when she hopped in.

“I was concerned because the weather looked bad,” Collins said. “But I knew that they were probably safe in brick buildings like these.”

At the Indiana Red Cross regional headquarters in Indianapolis, a team of employees and volunteers were manning an operations center, while another 10 volunteers waited Wednesday for possible assignment in the Kokomo area.

“We won’t have a good idea until tomorrow when we can get out and do damage assessment. We probably will see more people show up looking for help,” said Brooke Riester, workforce engagement manager for the Indiana chapter.

The Indiana Red Cross has set up an emergency shelter at the Kokomo Event and Conference Center, 1500 N. Reed Road, where 200 people were being housed and fed by 9 p.m. Wednesday. Another shelter was opened at Walnut Elementary School in New Ross in Montgomery County.

In Kokomo, Jonni Taskey heard a squirrel screech loudly from a tree outside her home on the 1000 block of Clark Street just after 8 p.m. She didn’t know why.

“Then I saw her jump down to the fallen tree and grab a baby,” she said, motioning to the massive maple lying across her Ford F-150 truck. “There must be another one in there.”

The half-century-old tree slammed into an awning above her front door on its way down, but Taskey said they never heard the tornado, even when it was tearing through the street at about 3:30 p.m.

“We were watching out the back, and when I saw that swirling, the shingles and stuff, I said, ‘We’re getting in the closet,'” she said.

Taskey, her husband, and their two dogs then took shelter.

“We were in there for not four minutes,” she said. “I never heard anything. I didn’t feel it. This is what we came out to.”

Beth Martin, another Kokomo resident, was able to get her dogs to safety just as the storm was ending.

“I looked out my front window and looked to the west and I could see rotation,” Martin said. “(The dogs) were scared to death; they were screaming.”

By sunset, the Cedar Creek subdivision was eerily quiet, save for the growling of a rare generator. State Police blocked each entranceway, allowing only residents with IDs to pass. Fallen branches dotted the road and thick tree stumps lay in many yards, with wood shards scattered.

Kelly Glass, along with her husband and daughter, walked along a dark sidewalk, using an iPhone flashlight as a guide through the pitch blackness. Glass, from Windfall, hadn’t heard from her parents, who live in the subdivision.

“They’re not answering their phones, so I’m just checking on them,” she said. She hoped, too, to take them home with her.

Roy Snow, who lives in First Flats Apartments along the Cedar Creek edge, said he went out on his back patio to see how bad the storm was.

“I saw the clouds flowing together, and they started swirling like a doughnut,” he said.

That’s when he and other residents went into the basement. By 10 p.m., many were hanging out outside. With no power, no cell service and nothing to do, they all went outside to “deal with the issues,” he said.

Nearby, Patrick Green walked from his home at Ashbury Apartments with a few friends, and a cooler.

“We’re going to get beer and barbecue,” Green said. “Some of these people need food.”