Given its previous eruptions, Mount Ruapehu is one of the most closely watched volcanoes in New Zealand. 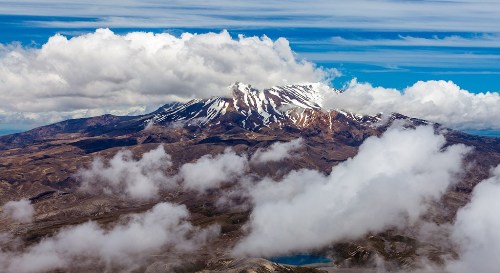 Those monitoring the active volcano say there have been sharp increases in the temperature of a crater lake and a rise in volcanic tremors.

The crater lake reached its lowest recorded temperature of 12ºC in August but has since heated up to 17.6 ºC.

The volcano, part of the backdrop for Mordor in the Peter Jackson-directed trilogy, last erupted in September 2007.

“It’s certainly not a regular cycle but we typically see temperatures getting up to 40 degrees. The tremor has started again, and again we often see that at the same sort of time … the processes are all linked together,” duty volcanologist Michael Rosenberg told Stuff NZ.

“Obviously it is an active volcano and it has the potential to erupt at very short notice.”

In May this year, the alert level for Mount Ruapehu was raised after the mountain’s crater lake temperature almost doubled in just a few weeks.

At the time, earthquake and monitoring service GNS Science said recent visits to the volcano had shown an increase in the output of volcanic gas, sparking concerns that an eruption is imminent.

Contained deep within the Earth, volcanos are vents where molten rock, debris, and gases from the planet’s interior are emitted.

When thick magma and gas build up under the surface, volcanoes expel lava, rocks and ash into the air. The mountain-like mounds that we associate with volcanoes are what remains after material spewed during eruptions has hardened around the vent.

A large eruption can be extremely dangerous for people living near a volcano. Flows of searing lava can reach 1,250 degrees or more, burning everything in its path, including humans and entire towns. Ash and toxic gases can cause lung damage and other problems.
It’s estimated that more than 260,000 people have died in the past 300 years from volcanic eruptions and their aftermath.

About 1,900 volcanoes on Earth are considered active, meaning they show some level of activity and are likely to explode again.

Many other volcanoes are dormant, showing no current signs of exploding but likely to become active at some point in the future. Others are considered extinct.