Professor Stephen Hawking’s final theory on the origin of the universe, which he worked on in collaboration with Professor Thomas Hertog from KU Leuven, has been published today in the Journal of High Energy Physics. 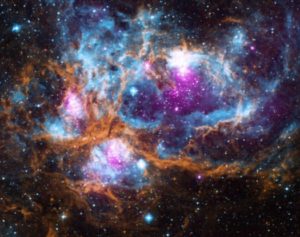 The theory, which was submitted for publication before Hawking’s death earlier this year, is based on string theory and predicts the universe is finite and far simpler than many current theories about the big bang say.

Professor Hertog, whose work has been supported by the European Research Council, first announced the new theory at a conference at the University of Cambridge in July of last year, organised on the occasion of Professor Hawking’s 75th birthday.

Modern theories of the big bang predict that our local universe came into existence with a brief burst of inflation — in other words, a tiny fraction of a second after the big bang itself, the universe expanded at an exponential rate. It is widely believed, however, that once inflation starts, there are regions where it never stops. It is thought that quantum effects can keep inflation going forever in some regions of the universe so that globally, inflation is eternal. The observable part of our universe would then be just a hospitable pocket universe, a region in which inflation has ended and stars and galaxies formed.

“The usual theory of eternal inflation predicts that globally our universe is like an infinite fractal, with a mosaic of different pocket universes, separated by an inflating ocean,” said Hawking in an interview last autumn. “The local laws of physics and chemistry can differ from one pocket universe to another, which together would form a multiverse. But I have never been a fan of the multiverse. If the scale of different universes in the multiverse is large or infinite the theory can’t be tested. ”

“We predict that our universe, on the largest scales, is reasonably smooth and globally finite. So it is not a fractal structure,” said Hawking.

The theory of eternal inflation that Hawking and Hertog put forward is based on string theory: a branch of theoretical physics that attempts to reconcile gravity and general relativity with quantum physics, in part by describing the fundamental constituents of the universe as tiny vibrating strings. Their approach uses the string theory concept of holography, which postulates that the universe is a large and complex hologram: physical reality in certain 3D spaces can be mathematically reduced to 2D projections on a surface.

Hawking and Hertog developed a variation of this concept of holography to project out the time dimension in eternal inflation. This enabled them to describe eternal inflation without having to rely on Einstein’ theory. In the new theory, eternal inflation is reduced to a timeless state defined on a spatial surface at the beginning of time.

“When we trace the evolution of our universe backwards in time, at some point we arrive at the threshold of eternal inflation, where our familiar notion of time ceases to have any meaning,” said Hertog.

Hawking’s earlier ‘no boundary theory’ predicted that if you go back in time to the beginning of the universe, the universe shrinks and closes off like a sphere, but this new theory represents a step away from the earlier work. “Now we’re saying that there is a boundary in our past,” said Hertog.

Their results, if confirmed by further work, would have far-reaching implications for the multiverse paradigm. “We are not down to a single, unique universe, but our findings imply a significant reduction of the multiverse, to a much smaller range of possible universes,” said Hawking.

This makes the theory more predictive and testable.

Hertog now plans to study the implications of the new theory on smaller scales that are within reach of our space telescopes. He believes that primordial gravitational waves — ripples in spacetime — generated at the exit from eternal inflation constitute the most promising “smoking gun” to test the model. The expansion of our universe since the beginning means such gravitational waves would have very long wavelengths, outside the range of the current LIGO detectors. But they might be heard by the planned European space-based gravitational wave observatory, LISA, or seen in future experiments measuring the cosmic microwave background.